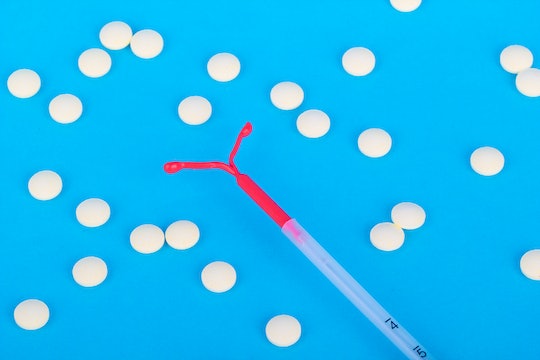 Can You Get Pregnant With An IUD?

No birth control is 100 percent effective. And with so many reproductive control options out there, it's totally legit to wonder can you get pregnant with an IUD?

An IUD, or intrauterine device, is a little, T-shaped piece of plastic that gets inserted into your uterus to demobilize sperm, to prevent those suckers from fertilizing an egg. According to Bedsider, there are two types of IUDs available: hormonal and non-hormonal. Bedsider also noted that hormonal IUDs release a small amount of synthetic progestin (a hormone), which can thickens your cervical mucus and prevent sperm from reaching the uterus. The progestin also stops you from ovulating and, according to Mayo Clinic, if you don't ovulate, there is no egg for sperm to fertilize, and (theoretically) you can't get pregnant. This is how most oral contraceptives work. The only difference with the IUD is the method by which the hormone is being delivered to your body, and the additional perk of the plastic contraption which can, as aforementioned, keep sperm from swimming up to meet the egg.

A non-hormonal IUD is made of plastic and a small amount of natural, safe copper. According to Planned Parenthood, copper repels sperm, which makes it a long-lasting (it can last up to 12 years, noted Planned Parenthood) and effective form of birth control. Both forms of IUDs must be inserted by a healthcare professional noted the journal American Physician.

About 25 percent of women on the hormonal IUD stop getting their period all together, OB-GYN Dr. Cristina Perez told Fit Pregnancy in the same article. So, if you're one of these women, you should be on the lookout for early pregnancy signs other than a missed period, or take a pregnancy test STAT if you think you might be pregnant.

If you use the non-hormonal IUD, because there are no hormones involved, you will continue to get your period if you're not pregnant. Which, as aforementioned, happens seldom.

More Like This
7 Things Pregnancy Dreams Can Mean If You're Not Pregnant
Yes, It’s Possible To Get Pregnant If You Have An IUD
Can You Get Out Of Jury Duty For Pregnancy? Here's The Verdict
Here’s What It Means If You Give Birth During A Solar Eclipse