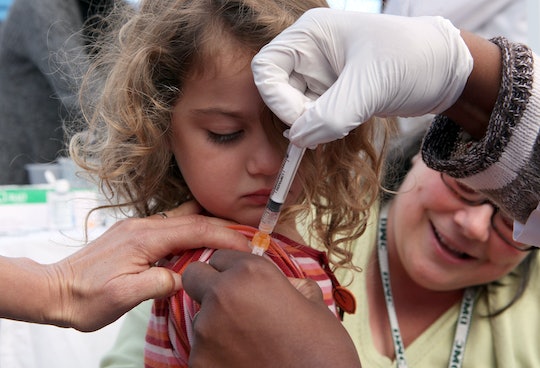 Can You Get Sick From The Flu Shot? Here's What The CDC Has To Say

With flu season in full swing from December to March, it's important to know how to best prevent getting sick. Besides washing hands frequently, and limiting contact with those already infected with the influenza virus, doctors recommend getting an annual flu vaccine for maximum prevention. But with mixed reactions, it leaves many to wonder can you get sick from the flu shot? There's a lot of chatter about whether or not it's true, so here's what the experts have to say.

First of all, the CDC says that getting a flu shot does not cause the flu illness. They go on to explain that the vaccine is made either with an inactivated virus that's not infectious, or no virus at all. An inactivated virus means that the virus has been killed, explains the U.S. Department of Health and Human Services (HHS). While you might experience "soreness, redness, tenderness or swelling where the shot is given," any other symptoms, such as "low-grade fever, headache and muscle aches" you may notice are not from the shot itself, explains the CDC:

In randomized, blinded studies, where some people get inactivated flu shots and others get salt-water shots, the only differences in symptoms was increased soreness in the arm and redness at the injection site among people who got the flu shot. There were no differences in terms of body aches, fever, cough, runny nose or sore throat.

Only one to two percent of people will get a fever after the injection, reports Live Science, but it's important to note that "rare but serious side effects can occur, including allergic reactions." Signs of an allergic reaction include difficulty breathing, swelling around the eyes or lips, hives, racing heart, dizziness and high fever — and you should alert your doctor right away! Live Science also note that there are additional possible side effects with the flu nasal spray (which is not recommended for the 2017-18 flu season): children who've received the flu nasal spray can experience runny noses, wheezing, headaches, vomiting, muscle aches, and fevers. Adults might also experience a runny nose, headache, sore throat, and cough. It's important to note, the CDC emphasizes these symptoms don't last as long as the flu itself, and again, this is not because the shot or the spray can give you the flu itself.

Because it takes anywhere from one to two weeks for the shot to be effective in protecting you against the influenza virus, concurs Harvard Health Publishing, if you do become sick after receiving the vaccine, it's only because you were bound to get sick around that time anyway — consider it a coincidence or bad timing.

Still, despite the CDC flat-out saying "a flu shot cannot cause flu illness," many people still believe the opposite. A 2015 study of 1,000 people in Vaccine cites that 43 percent of people believed the flu vaccine does cause the flu. Andrew Pekosz, Ph.D., professor of molecular microbiology and immunology at Johns Hopkins University Bloomberg School of Public Health tells Men's Health how unfounded the myth is, saying the flu virus doesn't travel through arm muscles — which is where the shot is given — so it's impossible to get it that way. Still, it doesn't prevent others from believing it is true, mostly because of the aforementioned flu-like symptoms that can occur after the vaccine is given, which can be mistaken for the flu itself.

Another reason for symptoms resembling influenza might be your body's enhanced protection of antibodies immediately following the injection — a possible cause of the low-grade fever, aches and minor pains, reports The Mayo Clinic. It can also be that the vaccine isn't correctly matched to the strain of flu currently circulating, making it less effective in guarding against you getting the flu. People may also contract other types of illness that mimic the flu, like a bad cold, and incorrectly attribute it to the flu shot.

The Advisory Committee on Immunization Practices (ICAP) recommends you get the flu shot every year, beginning at 6 months of age. The CDC emphasizes the importance of vaccinating before you get the flu, as the virus has already been publicized for it's contribution to the season's rising hospitalization and death tolls — even in otherwise normally healthy adults. Pediatric death is at 30 and counting, and even with a 30 percent effectiveness rate, experts urge use of the vaccine for at least a slight protection against this year's nasty, unrelenting virus.

The bottom line is getting a flu vaccine ultimately helps guard against the flu virus — it does not cause it. Minor discomfort or slight symptomatic aftermath may begin one to two days after receiving the vaccine, but whatever reaction is had from the shot itself is unlike experiencing the flu, which is much more severe and can actually lead to death. It should be noted that there are some who shouldn't get the vaccine, so it's important to speak with your doctor first. But for everyone else, as long as the virus is still circulating, it's not too late to get vaccinated for the flu.

More Like This
Can You Give A Sleeping Baby A Breathing Treatment? Experts Explain
New Study Finds Brains Of Teens Who Lived Through The Pandemic Aged Faster
Here’s Why Your Vagina Itches At Night, According To Experts
Why Does My Vagina Smell Sour? Vaginal Odors & What They Mean