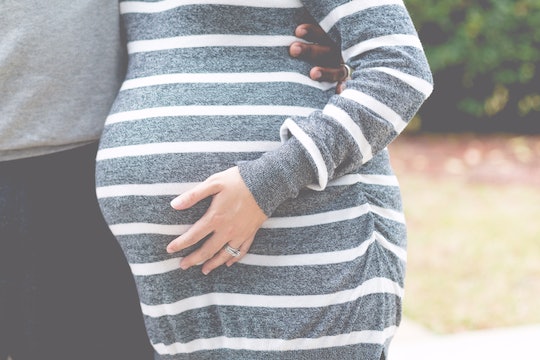 Can You Get An STI While Pregnant?

It's no secret that when you get pregnant, your body changes. But there are still plenty of things about your incredible body that stay the same. So if you're wondering, can you get an STI while pregnant, the answer is yes, you absolutely can. Conceiving a child doesn't miraculously make you impermeable to things like sexually transmitted infections, because nothing makes you miraculously impermeable to sexually transmitted infections. In fact, if you're pregnant, taking extra precaution when it comes to protecting yourself against STIs is incredibly important, as some STIs can actually be transmitted from mother to child during pregnancy and childbirth.

Safe sex is important for a multitude of reasons, even after you've conceived. And condoms aren't just for preventing pregnancy, they serve as protection against STIs as well. According to the Centers for Disease Control and Prevention (CDC), women who are pregnant can get STIs just the same as women who aren't pregnant. And because many STIs have no symptoms and are described as "silent" offenders, the CDC recommended pregnant women get tested for STIs as a part of their medical care during pregnancy, as STIs can have a lasting effect on both the mother and her babies.

But sex isn't the only way you can put yourself in danger for some of these STIs. Yes, they're known as sexually transmitted infections, but according to Baby Center, infections like Hepatitis B can also be transmitted through nonsexual contact. Sharp objects, blood, open wounds, and even household items like the toothbrush of an already infected person can transmit Hepatitis B, and can have serious health consequences for you and your baby.

The American Pregnancy Association (APA) reported that, while bacterial STIs are curable, they can be transmitted to your baby in the birth canal during delivery when left untreated. And some, like syphilis, can cross the placenta during pregnancy. But by getting yourself tested as part of your medical care during pregnancy, your OBGYN can prescribe antibiotics that are safe for your baby, and can cure you of your STI. Gonorrhea, chlamydia, trichomoniasis, bacterial vaginosis, and syphilis are all bacterial STIs that are curable with the right treatment.

Unfortunately, according to Baby Center, viral STIs are not curable — but it's still important to be educated on whether or not you do have a viral STI, and how it could affect your baby. Because even though viral STIs aren't curable, there are prevention tactics and protective methods that your doctor will take during your pregnancy and birthing process to help ensure that you and your child are the healthiest you can possibly be. According to WebMD, there are plenty of ways to protect yourself against STIs while pregnant, and one of the most important ways is through education. The more you know about STIs, how they're contracted, and how they work, the better you'll be able to protect you (and your baby) from them.