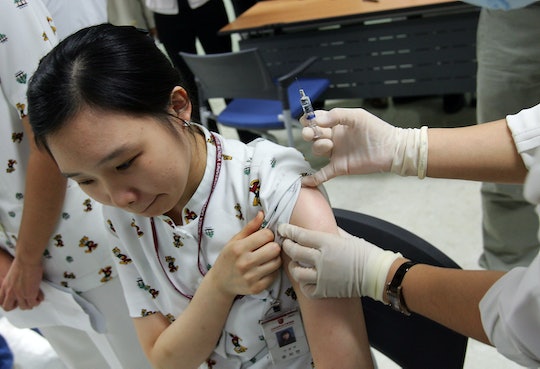 If You Have The Flu, Here's Why You'll Want To Wait To Get The Flu Shot

I can't say that the first thing I would want to do if I came down with the flu is roll up my sleeve for a flu shot. My first instinct would be to hide in bed for several days and hope someone would remember to bring me chicken soup or cough drops. But what if you were planning on getting the shot and you came down with the bug? Can you get the flu shot with the flu? Well, it depends on your symptoms.

If you're hoping that a flu shot will help alleviate your symptoms, or at least protect you from getting the virus again, you should know that whether you are able to get the flu shot while you have the flu depends, at least in part, on the severity of your symptoms. In an interview with Health, Aidtya Gaur, MD, associate faculty member in the Infectious Diseases Department at St. Jude Children's Research Hospital in Memphis, Tennessee told Health, "Typically someone with a mild illness can be given a flu shot, but if it's a moderate or severe illness, vaccination is postponed until the person recovers."

One reason you should not get a flu shot if you have flu symptoms is that you will not be able to distinguish symptoms of your current virus with symptoms that might be caused by a reaction to the vaccine, which could be important to your recovery from both medical events. Dr. Gaur continued to explain that a mild cold shouldn't keep you from having a flu shot, but a virus with more severe symptoms would be reason for your doctor to postpone the jab.

The Ohio State student health center website put more parameters on the conditions for getting a flu shot. They explained, "If you have a fever (temp over 99.5ish), the general consensus has always been that you should hold off on getting the flu vaccine until it breaks." This is because your symptoms might mask a reaction to the vaccine, but also because it can make the flu vaccine less effective: "If your immune system is all fired up fighting an infection, your white blood cells might get confused and attack the vaccine along with whatever ails you, leading to a weaker response to the vaccine."

However, the Ohio State health center points out that some doctors are starting to wonder whether they should still administer a flu shot to people with a fever because many people who do not receive their flu shot due to illness never bother to reschedule. They point out that because the flu can be deadly, especially to younger people, it might be better to "risk them having a slightly weaker response than to send them away and risk them not coming back for the vaccine at all."

Your health professional is the best person to ask if you should have questions about whether you should get your flu shot. If you would normally visit a pharmacy or flu clinic to get your flu shot, calling your primary care physician for their opinion before you go is a good idea.

It's also important to keep in mind that even if you get the flu, you aren't immune from getting it again, meaning it's still a good idea to get a flu shot once you recover. There are many types, subtypes and strains of the flu, as explained by the Centers for Disease Control (CDC), and while the flu shot doesn't offer 100 percent protection against any of these, "getting a flu vaccine can protect against flu viruses that are the same or related to the viruses in the vaccine," they said. If you haven't already had your flu shot this season, wait until you're feeling well enough and then sign yourself up.