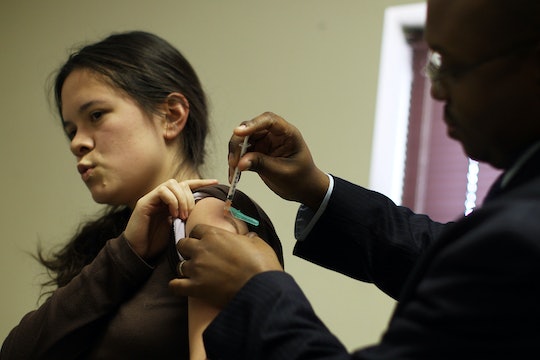 Can You Get The Flu Twice? Here's What Experts Want You To Know

This year's flu season has officially reached epidemic proportions. Some states are reporting their sixth week of influenza issues, with widespread activity causing en masse hospitalizations and a rising death toll. The potent H3N2 strain is wreaking havoc in every U.S. state, but it's not alone. With four different strains going around at any given time, you might have a better chancing winning the lottery than not catching a virus. So, if you've already been sick once this season, can you get the flu twice? The answer, unfortunately, is a resounding yes.

Dr. Nicole Bouvier, M.D., an associate professor of infectious disease at the Icahn School of Medicine at Mount Sinai in New York City, NY, tells Shape that if you've already had one strain of the flu, it doesn't necessarily mean you're automatically immune to any other strain currently circulating. That's because "the different strains are different viruses — and they're not neutralized by the same antibodies." Dr. Bouvier goes on to say that while the current number of flue cases are a bit concerning, it's not "completely out of the ordinary" either. In fact, the nation saw similar stats from the 2014-2015 season which was, again, a more difficult flu season than some of the previous ones we've all endured.

Other countries across the globe, including Britain, are experiencing their own pan panic-inducing Australian flu numbers, and an unfortunate vaccination efficiency isn't helping. Still, the Dallas Morning News recently stressed the importance of the flu shot, stating the Type B strain has already claimed 60 North Texan lives. “It's not uncommon for us to see flu B follow flu A in the flu season,” pediatrician Justin Smith tells Dallas Morning News. "But because flu B has seemed to come earlier this year, we have a lot more overlap."

Health officials in Multnomah County, Indiana report that just 10 percent of flu hospitalizations are people ages 18 to 49, so there are specific ages that are more at risk (primarily older adults over the age of 65, according to Healthline). Kentucky residents, however, are on their sixth consecutive week — the highest level of flu activity — dealing with the country's flue epidemic. That's why the Department for Public Health, part of the Cabinet for Health and Family Services (CHFS), urges individuals to seek medical treatment if fever, headache, cough, sore throat, runny nose, sneezing and body aches are present.

Likewise, Dr. Brenda Fitzgerald, Director for the Centers for Disease Control and Prevention (CDC), tells Reuters that 85 percent of this season's flu-related pediatric deaths were, in part, due to non-vaccination. “My message is, if you haven’t gotten a vaccine, please get a vaccine. Also, please get your children vaccinated,” Dr. Fitzgerald says, adding that everyone should "take every advantage that you can to protect yourself.” Even with the lower effectiveness rate, Dr. Dan Jernigan, Director of the Influenza Division at the CDC concludes the benefits outweigh the risk, as studies have shown the vaccine can shorten duration and severity of the flu, should you catch one (or more) of the four strains.

So if you haven't already, now is a good time to get a flu shot to help combat your chances of catching any strain, regardless of it's near 30 percent effectiveness rate. The flu season typically begins mid-December and ends in March, but can stretch longer or start earlier. It's best to get vaccinated in early Fall to stay ahead of the curve, but that doesn't mean you should avoid vaccination if you've already missed the aforementioned window. In the meantime, Dr. William Schaffner, infectious diseases specialist at Vanderbilt University Medical Center, tells ABC News that people should wash their hands often, calling it "the single most important thing" you can do to increase your chances of avoiding the flu. You should also sanitize areas where germs are likely to fester and infect, and use a humidifier to "slow the spread of those tiny particles of influenza that can suspend in the air."

It's not certain if we've reached the peak of the season just yet, so if you've already contracted one of the flu strains, buckle up. You can, in fact, catch the flu again.