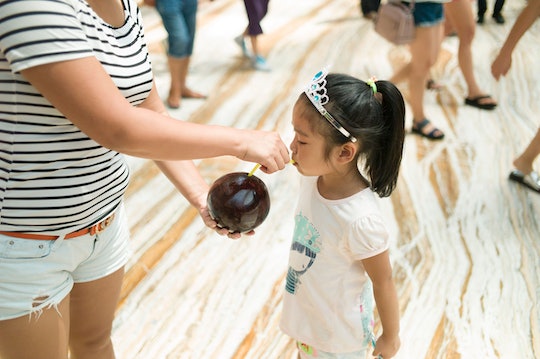 Can You Get Zika From Drinking After Someone? Here's What Scientists Know

The concerning rise of the Zika virus — and along with it, a rise in devastating birth defects from babies exposed to it in the womb — has led scientists to find out as much as they can about the virus, how it spreads, and the best ways that people can keep themselves from contracting it. It's pretty well-established at this point that Zika is primarily transmitted to humans through mosquito bites, but more recently, researchers have found that there are other ways to catch Zika — like through sex with an infected partner — because the virus lives in other bodily fluids too, like semen, vaginal fluid, and saliva, according to CNN. This relatively-new discovery has led to a whole new series of questions though, like can you get Zika from drinking after someone? What about from kissing? Sharing utensils?

Research is still ongoing to learn more about just how long the virus can live in different bodily fluids, and what kind of risk that poses, but the good news — so far, at least — is that the risk of getting Zika from these types of activities appears to be extremely low. What should you know about the Zika virus' ability to exist in saliva? Here's what the most recent research shows.

The Centers for Disease Control officially recommends that, because of the virus' ability to live in bodily fluids, condoms should be used "from start to finish, every time during vaginal, anal, and oral sex," to prevent sexual transmission of the Zika virus. This is especially important for pregnant women, or women who could potentially become pregnant, because of the risk the virus poses to unborn babies. So far, the Zika virus is thought to live in semen for as long as 6 months after transmission, which is longer than first thought, making unprotected sex with men who could have been exposed to Zika potentially dangerous.

But according to CNN, a recent study published in the New England Journal of Medicine has raised questions about whether semen is the only concern when it comes to sexual transmission. According to the study, researchers found that a woman in Paris contracted the virus after having sex with her boyfriend, who was thought to have gotten Zika himself while visiting Brazil. The case was notable to researchers though because the man ejaculated "only during oral sex and not during vaginal sex," meaning that, while "the most likely transmission route was semen via oral sex," they couldn't rule out that the virus hadn't been spread through other ways, including, according to the study, "saliva exchanged through deep kissing."

That sounds pretty scary, and according to The Daily Mail, officials in Brazil are taking the potential threat seriously. In fact, the potential for Zika transmission through saliva has prompted Paulo Gadelha, the president of Brazilian government health agency FIOCRUZ Brazil, to advise pregnant women "to avoid kissing people other than a regular partner or sharing cutlery, glasses and plates with people who have symptoms of the virus."

Will the CDC follow suit with this recommendation? Likely not, from the sounds of it — at least, not without more convincing data. One of the reasons, according to CNN? Saliva is very different from semen, blood, or vaginal fluid in some important ways. According to Dr. William Schaffner, medical director at the National Foundation for Infectious Disease,

Saliva, unlike vaginal fluid, has a whole bunch of enzymes in it to initiate the digestive process. Plus, it's being constantly swallowed and renewed. And once it gets down through the esophagus and into the stomach, it's hitting a lot of powerful acids that would destroy the virus.

In other words, it's unlikely that Zika would be able to survive in saliva, even if you were swapping a whole lot of it during a heavy make-out session. So the chances of it being passed on by sharing a glass or cutlery (where even less saliva would be shared)? Probably pretty rare.

According to CNN, National Institute of Allergy and Infectious Diseases director Dr. Anthony Fauci emphasized that, even if it's possible for Zika to exist in saliva, it's not what people should really be worried about:

Saying it can be transmitted via saliva is going way past probability. More than likely, it's a very rare event if it occurs at all. A mosquito bite is overwhelmingly the main way this virus is transmitted, with sexual acts involving semen a distant second.

While the CDC has said that it will continue to research the link between Zika and saliva, it certainly sounds like researchers' main concerns are still the same as they have been all along: how people can best protect themselves from Zika-transmitting mosquitoes. And while a vaccine to prevent the virus is currently in the works, the advice is still the same as it has always been — cover up exposed skin, wear bug spray, stay indoors in air conditioning or behind screens, empty any standing water where mosquitos can breed, and use condoms if you are at risk for possible sexual transmission. In other words, no need to put the kibosh on kissing or sharing drinks just yet.