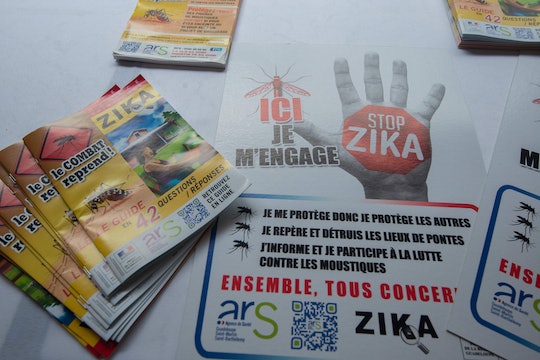 Can You Get Zika From Your Toddler? What Parents Need To Know

With the threat of Zika on the rise in the United States, many cities are beginning to prepare themselves. Though the virus has few serious symptoms, it can be very dangerous for pregnant women because of the birth defects it can cause. Given the range of transmission methods, many parents, especially pregnant mothers, may wonder: can you get Zika from your toddler?

According to the Centers for Disease Control and Prevention, symptoms of Zika can include a rash, pink eye, sore muscles and joints, and a fever. They usually last up to a week. Though there have been no fatalities from the Zika virus in the United States, researchers are still urging travelers and anyone who shows symptoms to seek testing so that they can track the virus' spread.

The most likely way a toddler could contract the Zika virus would be through a mosquito bite. Despite Zika's ability to be transmitted sexually, there has been no evidence of a toddler getting or giving Zika through breastfeeding. Toddlers who have Zika will show the common flu-like symptoms, and while it could be dangerous due to their weaker immune system, the virus does not pose a serious threat to their development.

When it comes to toddler-to-mother transmission, there is no way for a mother to contract the virus directly. The only way a mother would get Zika from her toddler is if a mosquito bit the infected child, then bit his or her mother. If a mother is pregnant and worried about contracting Zika, she should not be in direct danger even if her child is infected with the virus. Since there is no vaccine for the Zika virus, the best course of action is regular testing, using insect repellent and nets, and eliminating any mosquito breeding grounds, like standing water, from the surrounding areas.

According to CNN, the World Health Organization has said the disease is "spreading explosively" across the Americas, which is very unwelcome news for Olympics organizers. The New York Times reported that "as many as four million people could be infected by the end of the year," and that number is going up. It seems it is only a matter of time before the mosquitos that carry Zika migrate north with the warmer weather. Regardless of where it is, or who it is that is showing symptoms, health officials are urging people to seek medical care so that their family and community, especially mothers-to-be, can take precautions.