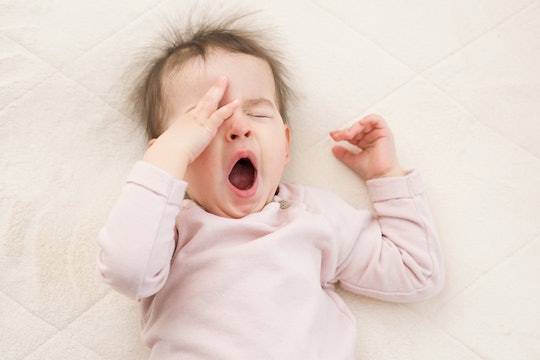 My kids rarely waver from their bedtime sleep routine. In fact, I can't think of a time they weren't asleep within an hour of their usual bedtime. However, we do travel internationally a few times a year, and the 5-6 hour time change is a killer. I've often wondered if we could just sedate these tiny humans and fast forward the whole jet-lag saga. If you have international flights on the horizon or just a toddler who has gotten way off her sleep routine, you might be wondering if you can give your toddler melatonin.

The verdict on giving toddlers melatonin is still pretty murky; some experts recommend it, and others warn against using it becuase not enough research has been completed on it. Overall, there haven't been very many studies conducted to test the safety of giving toddlers melatonin, so you'll want to use melatonin on your toddler sparingly and with the recommendation and oversight of your pediatrician. One concern expressed by Dr. Judith Owens, director of the Sleep Center at Boston Children’s Hospital is that "there are ongoing concerns based on studies in animals showing melatonin can affect puberty-related hormones. While there is very little evidence to suggest this is true in humans, the reality is no long-term clinical trials (which would settle the question) have yet been conducted."

For that reason, melatonin isn't something you'll want to rely on on a regular basis to get your toddler to go to sleep. Dr. Owens also gave a few stipulations to follow when considering giving melatonin to your toddler. First, she explained that melatonin should not be used "if your child is under 3 years old." Likewise, you shouldn't use melatonin with your toddler if their insomnia is situational, like caused by an anxiety that you can pinpoint; short-term, like an ear infection; or due to an underlying cause, such as sleep apnea.

Melatonin, a naturally occurring hormone in our bodies, has been made into a synthetic substance that you can get over the counter. Some pediatricians don't hesitate to recommend it to treat things like jetlag or problems toddlers have with falling asleep. However, Today's Parent points out that melatonin can't fix all sleep problems. They explained, "It won’t help a kid who is procrastinating bedtime learn good sleep habits; it won’t stop your daughter from waking up with nightmares; it won’t fix your baby’s colic; and it probably won’t stop your kid from hopping out of bed ready to start the day at 4:30 a.m." It simply isn't a magic drug that can fix all of those sleep issues. Instead, you'll have to continue to do the hard work with your child to encourage healthy sleep habits.

Other than jetlag, which shouldn't necessitate more than a few days of melatonin for a toddler, melatonin can be used to treat some sleep disorders that kids with ADHD or autism can develop or that can be caused in kids with those disorders because of other medications they take, according to Today's Parent. If you're wondering if this is right for your child, then have a conversation with your pediatrician.

In addition to the lack of studies on the use of melatonin in kids, the hormone is technically not regulated by the Food and Drug Administration, which might be a concern to you as a parent. Likewise, the hormone can cause "side effects, including headaches, dizziness and daytime grogginess," reported The New York Times, if used for longer periods of time.

If you're trying to get your child to sleep, you can work to encourage the release of their sleep hormones naturally, by decreasing light, especially from screens, explained Essential Parent. You should also try to decrease stress and noise in the lead-up to bedtime so your child's melatonin can be released in peace, which will hopefully lead to a peaceful night's sleep for all of you.