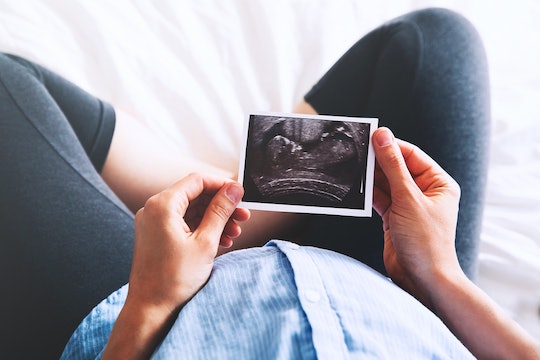 An OB-GYN Explains The Dangers Of At-Home Sonograms

The best part about my two pregnancies — aside from, you know, my future children — were the ultrasounds. Catching a glimpse of my baby on the screen filled me with excitement and anxiety all at once. But going to the doctor week after week was a hassle, and I often wondered if women can give themselves a sonogram. I mean, we live in a digital age; being able to DIY an ultrasound seems like a legitimate possibility

Women can take pregnancy tests in their own bathroom, monitor their heart rate without leaving bed, and receive a diagnosis from their computer (not a super accurate one, but still.) All of these, however, come with several warnings and dangers. And the same can be said when it comes to giving yourself a sonogram.

Yes, there is equipment available to give yourself a sonogram using a smartphone. As amazing as the device may be, learning about these "at-home sonograms" and any potential risks is important before making the leap to DIY your own sonogram.

It's worth noting that this at-home technology isn't new, either. According to Bit Rebels, at-home sonogram technology has been around for more than four years, but experts aren't overly thrilled about the idea of just anyone using an ultrasound device.

In an interview with Romper, OB-GYN Dr. Eva Martin says that the danger of giving moms false reassurance or, conversely, unnecessary worry isn't worth it. "If you don't feel your baby moving and her 'kick counts' are off, it could be dangerous if you decide not to call your doctor because the heart rate looks normal on an at-home Doppler," she says. "Alternatively, if you can't find the baby's heart rate using your at-home monitor, it could give you undue anxiety when everything is actually fine." The benefits, according to Martin, don't seem to outweigh the risks.

Furthermore, according to HuffPost, the FDA discourages excessive or unnecessary ultrasounds during pregnancy due to any unknown risks associated with getting an ultrasound too often. The FDA also noted that although ultrasounds don't have the same risk of radiation as x-rays, there isn't enough research to know the effects of getting them done frequently. These at-home machines work in the same way as a commercial sized ultrasound machine, and the harmful effects come right along with the negatives.

So, although technically, yes, you can give yourself an ultrasound, there are risks involved and unless you're a trained professional, you won't be able to understand what's really going on in there anyway. Instead of taking the risk, scheduling an appointment is most likely the safest and most accurate bet for both you and your growing baby.