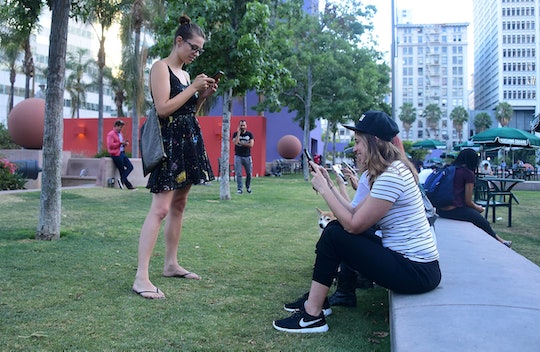 Can You Hack The 'Pokemon Go' GPS? It's Possible, But It Could Also Be Risky

I’ve got to be honest with y’all: I downloaded “Pokemon Go” the day it came out. (Like minutes after the app was released.) Unfortunately, the server crashed and it took me hours to log in. It took me forever to create an avatar, but before longco I was hunting Pokemon like a pro. Before long, I had an Eevee and a Rhyhorn. I had a Fearow and a Pidgeotto. But then I learned I could breed Pokemon. (Well, you can grow Pokemon in eggs and hatch them by moving, walking, and taking steps.) But can you hack the “Pokemon Go” GPS? Can you trick the system and help those eggs hatch quicker? According to several Reddit users and Motherboard you can, but there is a risk.

This hack could come at a cost.

In fact, according to Niantic — the development company behind “Pokemon Go” — players are not to use “any unauthorized third-party software (e.g. bots, mods, hacks, and scripts) to modify or automate operation,” or “attempt to circumvent any restriction in any Service,” including restrictions on geography. If you do, Niantic has the power to “suspend or terminate your access to some or all” of the game.

And the company will do it.

However, if you aren’t worried about being blacklisted, you can spoof your phone's GPS system. (According to a “Pokemon Go” subreddit, spoofing an Android phone involves running a rootkit to take control of the device’s operating system, installing various pieces of unapproved software, and letting these new programs report whatever GPS location you choose. It seems spoofing an iPhone is another matter entirely.) One redditor said the trick to "safe spoofing" — i.e. cheating without getting caught — is to change locations frequently and move at a normal speed:

Make sure you change locations at a human speed...there is a setting at the bottom that automatically moves location randomly. Set the distance to something small so you move as if you were running (maybe a bit faster) and just leave your phone on to gain [mileage/kilometers which helps you level up and hatch Pokemon].

Yibada also published an article on "Pokemon Go" GPS spoofing earlier this week, which shows people how to spoof without getting banned.

However, it should be noted that not everyone has been able to get this "hack" to work. Another redditor on the "Pokenmon Go" subreddit said that his/her game detected "mock locations...[was] enabled [on their phone] and shutsdown [all in-game] movement."

Personally, I think that sounds like a whole lotta extra work to "catch em' all," and I would rather go walk around my neighborhood, a museum, or even the mall — heck, I could strap it to my hyperactive toddler and get better results — but hey, to each their own. Because at the end of the day, "Pokemon Go" is a game.