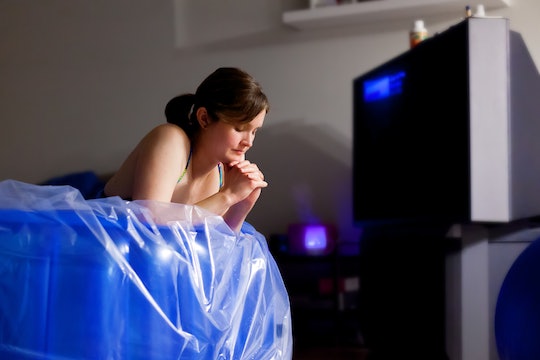 In The Light Photography/Shutterstock

Having a baby via cesarean is no walk in the park, especially if it came as a surprise the first time around. And while some women are happy to have repeat C-sections, others strongly desire a different experience. The popularity of the option of home birthing is growing stronger by the year, and many C-section moms are interested. But can you have a home birth after a C-Section?

Dr. Amy Gilliland, a doula trainer and consultant, says it depends on several factors, including the reason for the cesarean, the spacing of the pregnancies, the legality of home birth in the area, and who the medical care practitioner is for the second pregnancy.

OB-GYN supervision of the midwife performing the home birth is critically important, Gilliland tells Romper in an exclusive interview. "Some midwives have excellent supervision from an obstetrician and are willing to accept the risk. They may have stricter reasons for a hospital transport, but the biggest risk is usually separation of the scar tissue along the uterine wall. This often has very minor symptoms, which is why pain medication is contraindicated for people laboring after a previous cesarean."

"Uterine rupture can happen suddenly or slowly and is an emergency whether a person is in the hospital or not," Gilliland continues. "However it is an uncommon to rare complication, so it just depends on what is considered more risky: the second major abdominal surgery or the risk of uterine rupture."

For Michigan mom of three Lynn Iacopelli, the choice was an easy one. After having virtually no say in the matter of her first birth that ended in a sudden C-section, she knew she wanted a redemptive birth experience when she got pregnant with her second daughter. "I called a few doctors and none were willing to do a VBAC (Vaginal Birth After Cesarean)," Iacopelli tells Romper. "I did not want to waste my time during labor to fight for a VBAC, so I decided we'd do a home birth. I think my husband was a bit nervous, my parents were furious, and my in-laws were very scared, but always knew it was our decision, not theirs."

"We interviewed a few midwives and found one we loved," Iacopelli continues. "It was a completely different experience from beginning to end. She explained absolutely everything with us, and each option was laid out so we could make very informed decisions. I was a little bit nervous about a rupture, but my midwife instilled confidence in me and I felt it was worth the risk." Iacopelli later went on to have a second home birth to deliver their third child, a son.

Having a home birth after a C-section may not be what every woman desires, but for those who do, it can be a strong option. Find a care provider who is willing to listen to your desires, study your medical history, and determine together whether a home birth could be right for you. Every woman deserves the chance to birth in a way that feels both safe and empowering.