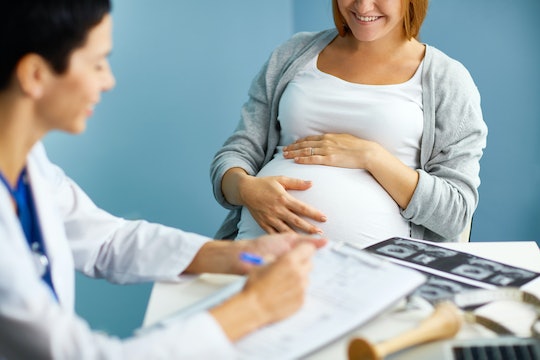 Here's The Deal With Twins & A Vaginal Delivery

With all the buzz around the impending deliveries of both Beyoncé and Amal Clooney, twins have been having a bit of a moment. But for women who are pregnant with twins, the stress and worry is very real. (And there's no paparazzi to put their giant bump in US Weekly.) There are so many questions, like, can you have a vaginal birth with twins? Is it safe?

More Like This
Your Guide To Swimming Postpartum
Lightning Crotch Can Actually Tell You These 7 Things About Your Pregnancy
Could Increased Anxiety Mean You'll Go Into Labor Soon? Experts Explain
Pool Cannonballs Are Pretty Much A No-Go During Pregnancy

The numbers are daunting. In the United States, upwards of 75 percent of all twin births are born via C-section, noted National Health Statistics Data — that's an increase of over 20 percent in just over 10 years, according to the data. But is there a significant benefit that would justify so many C-sections? Maybe not, according to a study published by the New England Journal of Medicine. In this study, nearly 3,000 mothers of twins across 28 countries were randomly assigned with a planned C-section or vaginal delivery of twins. The results, given our country's preference for C-sections, were surprising. There was no significant clinical benefit found to continue the trend wherein the majority of twins are born via C-section.

Researchers measured this through infant mortality rate (IMR, which is the gold standard of many statistical studies), maternal health, maternal and fetal morbidity, and gross fetal injury, such as skull, femur, humerus, tibial, and spinal injuries. They measured the quality of the birth and recovery across the board and the results were fairly conclusive and surprising. They found that C-sections straight up did not reduce the risk of adverse outcomes of twin birth. They wrote in their findings:

This study was completed in 2013, and since then, the rates of C-section births for singletons and multiples has started to decline, according to Blue Cross and Blue Shield, citing better understanding of possible long-term effects of C-sections on the mother, and lack of supporting evidence to continue the practice.

Having a multiple birth carries inherently more risk than just a singleton pregnancy, according to the World Health Organization, but that has more to do with the pregnancy and birth as a whole than just one aspect of delivery. The primary concern with delivering twins vaginally, is that baby number one will be in the correct "vertex" or "head-down" position, and the second twin will be in a "non-cephalic" or "breech" position. Breech in any hospital is almost always the keyword for "cesarean," suggested Fit Pregnancy. According to the American Journal of Obstetrics and Gynecology (AJOG), however, twins are a bit different. They found that the risk to the baby with a vaginal birth was negligible and that the benefit to the mother was superior. Meaning, it's not more likely to result in an injurious birth to the baby, and the mother recovers better from vaginal birth.

Can you have a vaginal birth with twins if this sort of complex presentation occurs? AJOG encourages it, and the American College of Obstetricians and Gynecologists (ACOG) have begun evolving the language of their guidelines after these studies. They're now working with hospitals and OB-GYNs to decrease the rate of the primary C-section, even in the case of multiples. Up until now, it's been the preferred practice by obstetricians not only because of a perceived sense of safety around the procedure, but also as a means of preventing litigation due to a possible birth injury. With the ACOG guidelines evolving, this should aid in further decreasing the number of C-sections, as they will no longer be considered the safest option in all cases.

But just because a vaginal twin birth can be safe doesn't mean it always is. For instance, if there's a maternal health problem like preeclampsia, which is twice as likely to develop in the mother of twins than of a singleton according to the American Pregnancy Association, or where there's a fetal anomaly present like twins of vastly different sizes or health, a C-section may be best. However, the studies say that if the mother is healthy and the babies are healthy, than there is no medical reason to avoid a vaginal birth.

In the end, this needs to be a closely-monitored situation and discussion between you and your providers, and the final decision has to be one that you are comfortable with completing. There is no one right way to have your twins, just like there's no best Beyoncé song. (Except "Hold Up" is the best song.)