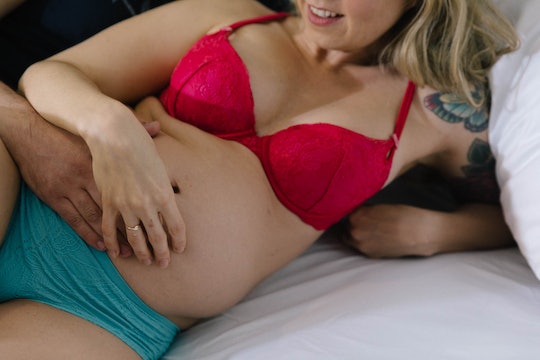 I'm not going to lie, during my first pregnancy, I was not interested in sex at all. With all of the morning sickness and lethargy, it was a misery just to stand up. However, with my next pregnancy? All bets were off. But there was a problem — a big one. My belly was huge. No one tells you how to accommodate your growing bump during sex. It's not covered in health class, and you're tired. Sometimes, you don't want to do any of the work, but, for safety's sake, can you have missionary sex in late pregnancy even though you've been told not to lie on your back?

After you hit the halfway point in your pregnancy, the uterus is large enough that if you lie in the supine position, it can press on the vena cava (a large vein that carries deoxygenated blood to the heart) and disrupt the blood flow to the fetus, according to The Journal of Physiology. There is no amount of time that is deemed safe to remain in the supine position, so chances are, you are going to have to get a bit more creative with your sexual positions late in your pregnancy to make sure your baby is getting enough blood while you're getting it on.

Of course, if missionary sex is something you really want, you can talk to your OB-GYN about their recommendations. But it's worth noting that both the American College of Obstetricians and Gynecologists and the March of Dimes Association warn against the practice. When you put pressure on the vena cava, you're not just decreasing blood flow to the uterus. According to the Journal of Physiology, there's also an "increased risk of stillbirth" if you're lying in the supine position, because of the "negative sequelae (condition related to a disease or injury) of the woman adopting this position during the day." It sounds super scary. But again, it's worth asking your doctor. Some may tell you to listen to your body and others may ask you to avoid the position entirely.

But don't worry — you have options. Sure, you could get on top, but you're 38 weeks pregnant and your giddy-up may have rode off the range weeks ago. Also, you could get on all fours and work it like a blindfolded Anastasia Steele, but let's be honest — do you really want to support your weight? I thought not. Plus, pregnancy-related carpal tunnel is a real thing that women suffer from. I know I did. Not only was holding up my weight unappealing, it was freaking painful. I remember getting on my hands and knees just to find something my toddler threw under the bed and the shooting pain made me want to cry.

I want my body to be shooting something during sex, and it sure as heck isn't pain. In my experience, the best positions for third trimester sex are the ones where you lie on your side. Your partner can enter you from behind or you can scissor your legs and find your pleasure that way. It's comfortable, requires minimal effort on your part, and the best thing is that it usually doesn't hurt. Also, how often do you think to try new positions? (Especially in a long-term relationship.) It's easy to find yourself in a sexual rut. Perhaps a little worry over a sore wrist and a suppressed vena cava can ignite a new spark into your sex life.

I am a back sleeper, so I know the acute discomfort of being forced to sleep on your side or lie on your side during the course of your pregnancy. It's miserable, but it may be safer than being on your back. Just consider all the fun you could have trying out the other positions.

More Like This
How To Increase Your Sex Drive While Pregnant
Are Boy Babies Usually Late? Signs Your Baby May Be Born Late
How To Tell If Someone Is Lying To You: 34 Signs To Watch For
New Report Shows 80% Of Pregnancy-Related Deaths Are Preventable