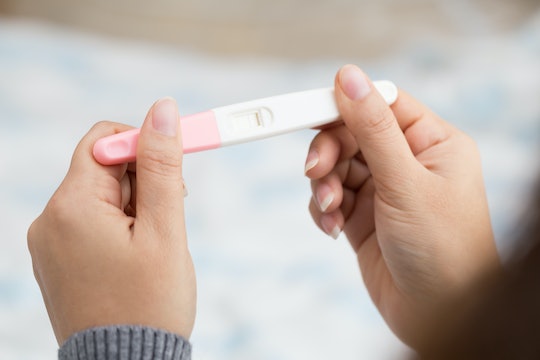 Feeling Pregnant Before Your Missed Period? An Expert Explains Why

When people say "life is about the journey, not the destination," they aren't talking about pregnancy. This is one situation in which the outcome is definitely the point and the journey can be a mixed experience. On the one hand, you and your partner may feel closer as you share the anticipation of a positive pregnancy test. However, the pressure to have sex on the right days can make lovemaking feel more like a task than a romantic activity. And then there's all the waiting and wondering. Like can you have pregnancy symptoms before a missed period? Experts say it's impossible to know for sure, but there are some signs that may indicate a baby's on the way.

According to Adrienne Zertuche, OB-GYN at Atlanta Women's Healthcare Specialists, "The cardinal sign of early pregnancy is when a woman does not start her menstrual cycle within one week of when she expects it." Other common symptoms of early pregnancy include nausea, vomiting, breast enlargement and tenderness, increased frequency of urination, and fatigue. You may notice some of these before a missed period, however, Zertuche adds that "many of these [symptoms] can be subtle!"

Additionally, some early pregnancy symptoms may actually be caused by other medical issues. "Mild menstrual-like cramps (without bleeding), bloating, constipation, food cravings and aversions, mood changes, and lightheadedness" are all potential signs of both pregnancy and other conditions. Zertuche says, "If you experience any of these symptoms, especially in the setting of a missed period, you should take a home pregnancy test and call your OB-GYN. He or she will decide if you need to be evaluated in the office and have further testing done."

For those of us who haven't thought about fertility cycles since middle school health class, Romper asks Zertuche for a refresher on conception timelines and when you can first take a pregnancy test. "Typically, a woman’s ovary releases an egg approximately two weeks after her last menses began. When a sperm fertilizes this egg, the resultant cell (zygote) rapidly divides into a collection of cells called an embryo. Over the course of the next week, the embryo travels along the fallopian tube and into the uterus, where it implants in the cavity (endometrium). Supported by the mother’s surrounding cells and blood supply, the embryo then begins to grow and develop into what will later become the fetus and placenta. This rapidly dividing tissue produces hCG (the pregnancy hormone). Once the urinary hCG level rises high enough — which will be typically within a few days of the woman’s next expected menstrual cycle — a home pregnancy test will turn positive," explains Zertuche.

One of the biggest challenges women face when trying to conceive is figuring out when their most fertile days are and when the egg has been released. Romper asks Zertuche about methods for tracking fertility in order to improve your chances of successful conception. "While it is not mandatory, keeping a menstrual calendar may be valuable to a woman trying to get pregnant so that she can determine the timing of her fertile window," she says. "If day one is considered the first day of a woman’s menstrual cycle, and her period typically occurs approximately every 28 days, she can expect to ovulate on day 14. The fertile window is the three to five days leading up to and including the day of ovulation (i.e. days 10 to 14). To maximize the chances of pregnancy, a woman and her partner should have intercourse every day or every other day during this fertile window," says Zertuche.

Beyond using a simple calendar, "Other methods for fertility tracking include measurement of basal body temperature, evaluation of cervical mucus, and ovulation predictor kits," says Zertuche, who recommends consulting with an obstetrician to learn more about any of these methods.