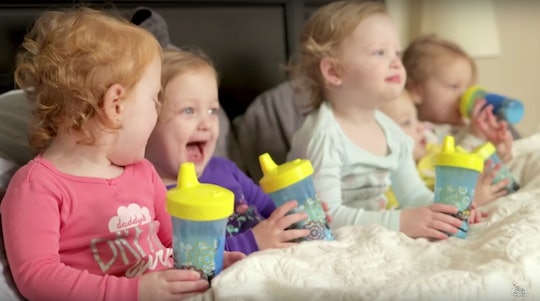 If You're Wanting Your Own Set Of Busby Quints, Here Are The Odds Of Conceiving Them

I remember vividly the first time I heard about quintuplets. I must've been about 4 or 5, and I was watching a documentary with my grandmother. I was absolutely terrified. I looked over at my grandmother and asked, "Can that really happen?" She just laughed and said, "Apparently." She had to talk my preschool behind off a ledge that day, assuring me that I was very unlikely to shove five babies out from my own body, and that I could go back to coloring. Now I wonder, are all these babies from in-vitro, or can you have quints naturally? Because I want to avoid that like the plague.

If you've watched TLC's OutDaughtered, then you'll know all about the Busby quintuplets and their 7-year-old daughter Blayke. You'll also be aware that the quintuplets were conceived with the help of fertility drugs and intrauterine insemination, which mother Danielle Busby chronicled on her blog. However, you might not have heard about a much less famous set of quintuplets born in 1934. The Dionne quintuplets of Ontario — Marie, Emilie, Cecile, Annette, and Yvonne — were born to Elzire Dionne years before the first real fertility drugs would begin to be prescribed, according to PBS.

There are twins in my family, and as soon as I found out that I would need a truckload of fertility drugs, the blessings of a priest, and probably some serious Hogwarts magic to get pregnant, I was sure I'd end up with two or more. And honestly, somewhere deep in my hindbrain, where memories linger and fear lives, I may have triggered the sinking fear that I'd end up with my own set of Dionne quintuplets. Or sextuplets. Octuplets. Whatever 10 babies are called. Enough that would make people tell me that I was giving birth to a hockey team.

Multiples scared me. It's not that I don't think they're awesome, it's just that it was something I knew I had very little control over. I needed to know the odds for real, so I asked genetic researcher Peter Voloskov of Brooklyn, New York. He tells Romper, "Because it's happened, we know that it is a possibility." He says that twins and even triplets are more common than ever, but high-order multiples like quads and quintuplets are so rare as to be absurd. "You're looking at a one in 50, 60, 70 million chance of natural quintuplets, and carrying them long enough to have them born healthy enough to survive is a challenge."

There goes my anxiety and my chance at a reality show.

There a few main factors in conceiving multiples naturally: genetics and age, and to a lesser extent, race, and body type. According to Baby Center, older women with a family history of having multiples are the most likely candidate for naturally conceiving more than one baby at a time. Also, black and Latina women and tall women are more often the mother of twins than Asian or white women and short women. It used to be believed that multiples "skipped a generation," but as The New York Times reported, this is a myth. "The illusion may have arisen because men who inherit the gene from their mothers are unaffected by it (they do not ovulate), but can still pass it on to their daughters, who, in turn, will have an increased likelihood of conceiving twins," the article noted.

Thank the gods that conceiving quintuplets naturally, without the benefit of drugs, is so rare as to almost be unheard of. According to VeryWell, your risk of conceiving quints is less than one in 60 million. But I think you know that doesn't mean I'm going to stop worrying about it any time soon. Maybe I'll stop thinking about it after menopause. Maybe.