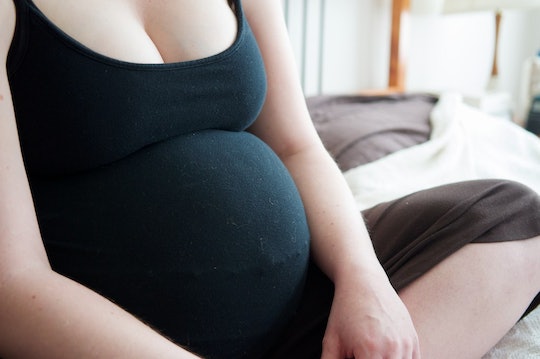 Can You Have Sex After Your Water Has Broken? The Truth About Getting Down During Delivery

Pregnant women are often told if they are ready to pop, they should have sex to induce labor. But what about once labor’s already started? Although your water is most likely to break sometime during active labor, it is possible for it to rupture during early labor. In fact, you many endure hours (or even weeks) of irregular, unpredictable contractions before active labor really begins. Some women might want to enjoy a little hanky panky to take their mind off the pain, but don’t know if it’s safe to have sex after your water has broken. After all, this isn’t the type of thing you think to ask your doctor.

Depending on your choice to give birth at home or the hospital and how your labor progresses, you may find yourself with a lot of downtime while you wait for your labor to kick into high gear. My partner and I had planned to labor at home for a while, but it turned out that I delivered my baby less than four hours after my water broke. Needles it say, when it comes to birth, the best laid plans tend to get thrown out the window. And if you’re thinking of using sex to make the time go by faster (and help you forget about the excruciating pain), there are a few things you should know.

Is it safe to have sex after your water has broken?

In short — no. According to the Mayo Clinic, putting anything into the vagina after the amniotic sac has broken can introduce bacteria and lead to infection. When I was in labor, my midwife even tried to reduce the number of times she examined me to check how far along I was in order to prevent infection.

But what about having an orgasm during labor?

There’s very little evidence that talks about the safety of labor orgasm. Chances are, orgasm will be the last thing on your mind when you’re in active labor (I know it was for me). But, anecdotally, people have been sharing stories of pleasurable sensations during labor for generations. In 1988, Barry Komisaruk, a professor of psychology at Rutgers University in New Jersey who studies orgasm, published a study in the Journal of Sex Research that found sexual stimulation and orgasm reduce sensitivity to pain.

But, because penetration is a no-no during the delivery, you may want to try other ways to relieve the pain. You can always take a cue from one mom-to-be, who choose to dance their way through labor pains.

Yes, really. In a 2013 study published in the journal Sexologies, surveys were collected 109 from midwives who had assisted 206,000 births. The midwives, in total, reported 668 cases of mothers reported “orgasmic sensations” during childbirth, and nine instances in which mothers actually had orgasms during delivery. This goes against almost every common narrative about the painful nature of childbirth.

But some people think it makes perfect sense that childbirth might be orgasmic for some people. Christiane Northrup, a board-certified OB-GYN and author of Women's Bodies, Women's Wisdom and Mother-Daughter Wisdom, told ABC News that a baby moving through the birth canal mimics, “the penis going into the vagina, to cause an orgasm.” “Labor itself is associated with a huge hormonal change in the body,” Northrup added. “Way more prolactin, way more oxytocin, way more beta-endorphins — these are the molecules of ecstasy."

While orgasmic childbirth is possible, what’s most important is the health and safety of you and your baby. Try not to put pressure or expectation on what kind of labor you’ll have, because the nature of the experience is so unpredictable.

More Like This
What You Need To Know About Bed Rest & Oral Sex
How Long Does It Take For Sperm To Induce Labor?
When Does Pregnancy Horniness Kick In?
How To Talk To Your Partner About Wanting A Baby