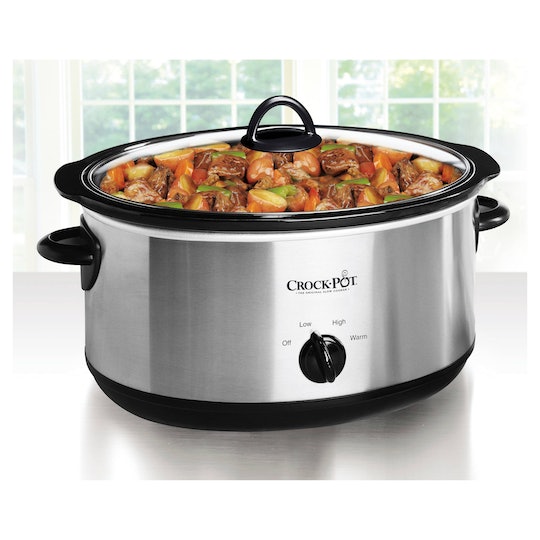 Few things in modern life are as dangerous as a house fire, which is why, "Did I turn the stove off?" becomes a nagging worry whenever you leave the house for extended periods of time. But a slow cooker is different, right? After all, Crock-Pot recipes often require seven or eight hours of simmering, and no one spends all day inside their house. In light of a recent episode of This Is Us, however, I have to ask, can you leave a Crock-Pot on when you're not home? Or have I been doing this wrong all my life, endangering house cats and neighbors?

Don't panic. The Crock-Pot is basically safe to leave on even when you're not home, as long as you follow the instructions. "It is safe to leave your Crock-Pot slow cooker on while you are out of the house," Crock-Pot brand representative Aileen Fanjul told Fox News. "The slow cooker runs on very low wattage, allowing you to cook a meal over an eight to ten hour period of time. Programmable units include an Auto-Shift to Warm feature, automatically shifting the unit to a Warm setting once the set cook time is up." Romper has reached out to Crock-Pot for comment, but had not heard back at the time of publication.

That said, in order to be used safely, your Crock-Pot must also be in good working order. This bears repeating: a broken Crock-Pot — frayed electrical cord, damaged stoneware, or a cracked lid — is an unsafe Crock-Pot. Don't use it, don't try to repair it, and don't fob it off on a neighbor. Either send it back to the manufacturer, or throw it away.

And this, really, is the message of that shocking episode of This Is Us. (Spoilers ahead.) Eater called it "a slow-cooked tragedy," but you can't blame the slow cooker for Jack's death. After all, Jack and Rebecca got the Crock-Pot from a neighbor, not a store, and ominously enough, that neighbor warned them about a broken switch. Never get a kitchen appliance this way, you guys. No owner's manual, no sale.

Also, don't used a damaged appliance. "Do not operate any appliance with a damaged cord or plug or after the appliance malfunctions, or has been damaged in any manner," advises the Crock-Pot owner's guide, because a cracked Crock-Pot is apparently a dramatic accident waiting to happen.

Jack's next mistake? Tossing a kitchen rag within heating distance of the slow cooker — another owner's manual no-no. Because the Crock-Pot is an electrical appliance, you shouldn't leave flammable objects beside it or set it on flammable services. Keep your Crock-Pot 6 inches away from the wall or other objects on your countertop, which should itself be flat, stable, and heat-proof. Additionally, when chicken takes seven or eight hours to stew, the low heat setting is your safest bet.

Reading the Crock-Pot manual, you get the strong sense that the greatest danger a working slow cooker presents are contact burns, which you can prevent with oven mitts and a dash of common sense. Nevertheless, it would be irresponsible of me not to mention that it's unwise to leave a slow cooker on in the house if you have rambunctious cats and dogs living inside — if only because they might burn themselves. And it goes without saying that you should never leave children unattended with a slow cooker running.

If you still feel anxious about leaving a Crock-Pot on unattended, know that you don't have to use it this way. Slow-cooking should only make your life easier, and you should never allow any kitchen appliance to cause your blood pressure to spike. If you choose to leave a slow cooker on while you're away, however, rest assured that it's safe. Just read your owner's manual first.