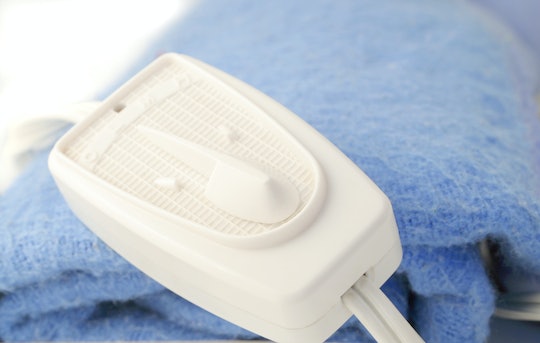 With the weather turning very cold over the past few weeks, I've been turning to my electric blanket more and more. It's just so cozy and the warmth radiates into my very bones. There's nothing more soothing than going for a long run in the cold, taking a brisk shower, and then wrapping up in a heated blanket with a cup of tea. It's heaven. However, I worry about using it at bedtime. Can you leave your electric blanket on all night, or is it a hazard to your health?

While the temptation is great, especially if you live with someone who prefers to keep the thermostat quite a bit lower than you'd like, it's simply not safe to keep an electric blanket on all night long. Doing so can lead to burns, dehydration, and there is some question about the safety of the prolonged exposure to the electromagnetic waves produced by the blanket, notes the National Cancer Institute. The number one risk with keeping it on for so long while you're in a compromised state is fires. The wires that run through the blanket are tiny filaments prone to damage. These can easily overheat and cause sparks and fire, which is why it's important to turn it off before bed and before you leave the house. Never leave an electric blanket turned on and unattended.

I'm certain my children are actually the children of Jack Frost since they like the house so cold. In fact, as soon as they get home from school, the first thing they do is strip down to their knickers and tee shirts. I've only just been able to get them to put their clothes in the hamper instead of leaving a trail of socks, jeans, and hoodies from the door to their room. I'm still working on my husband. I mean, the laundry hamper isn't invisible, is it? Am I dreaming that this wicker thing holds dirty clothing? Because the socks always land beside it. I mean, how?

Either way, while they're de-kitting themselves of their daily attire, I'm in my university hoodie, three t-shirts, leggings with a ridiculous pattern on them that I'd never consider wearing out of the house — except for Target runs, the grocery store, and maybe to the occasional single starred restaurant. On top of that, I have a hot beverage and an electric blanket cranked up to "Satan's hug."

I get coldest at night. Sure, like any normal human being, I have to leave one leg uncovered from under the blankets so that I don't suffocate, but I get dang cold without a pile of plush atop me. It's heavy and inconvenient. More than once I've wondered, "Can you leave your electric blanket on all night in a safe way?" And the long and short of it, according to people who've seen everything that can possibly go wrong — no. You cannot. New York firefighter Derek Lamar tells Romper, "You can get seriously burned or start a fire. It's the same premise as boiling a frog. If you gradually increase the temperature slowly over time, the frog never realizes it's being boiled to death. If your skin keeps getting hotter and hotter, you can wake up with a severe burn that you never felt forming." I don't want to be a boiled frog. That sounds hugely unappetizing.

Lamar went on to say that electric blankets also need really close supervision because they can cause fires quickly. "They're manufactured to resist burning and fires, but they're still fabric over heat and that's a recipe for a fire. They can be used safely and I love mine, but you need to be vigilant, never sleep with them, never leave them unattended, and never let children use them unsupervised — absolutely never on a baby."

I suppose I'll keep my heated blanket usage for my post-run bliss, because the alternative is terrible.

More Like This
Here’s Why Your Vagina Itches At Night, According To Experts
Why Does My Vagina Smell Sour? Vaginal Odors & What They Mean
Experts Don’t Want You To Leave Your Fake Tree Plugged In
When It’s Safe To Bring Your Newborn To A Restaurant, According To A Pediatrician