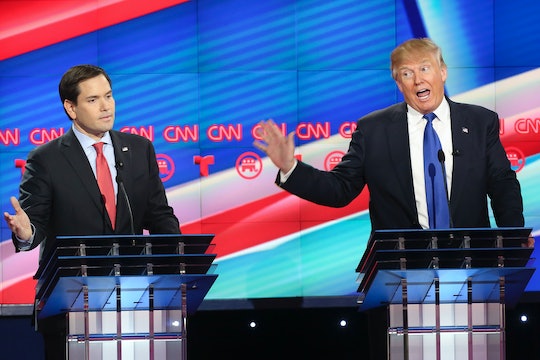 Can You Lose Super Tuesday & Still Win The Nomination? It's Difficult But Not Totally Out Of The Question

Super Tuesday, the first Tuesday in March in which many states take to the polls to choose a presidential nominee for their party, is a big deal. The way political pundits talk about it, it's the only vote that matters (until the next big primary, that is, right?). But despite the fact that many believe Super Tuesday is the final nail in the coffin for candidates unable to take home big wins, it's not as simple as that. In fact, many analysts believe that a candidate can lose Super Tuesday and still win the nomination for their party. Of course, as always, that depends on who're talking to and who you're talking about.

Super Tuesday is confusing because it's just as much about turning voters out as it is amassing delegates. This year, there are 595 delegates at stake for Republicans and 1,004 for Democrats. To win the nomination, Dems need an overall 2,383 and Republicans need 1,237. It's a big night. And depending on what you read, how you calculate the odds, and whether you wish upon a star, the outcome of Super Tuesday could mean everything or nothing.

For example, there are many in the GOP that think Marco Rubio could lose every single state to Donald Trump on Super Tuesday and still win the nomination. Because the Republican field is so crowded, and the party itself can't seem to make up its mind about who to root for, there are lots of theories surrounding each candidate and what they would have to pull off on Tuesday night to move forward in the election.

Given the complicated delegate math, it's probable that some losers in the Republican field on Super Tuesday will have no choice but to drop out of the race entirely. The numbers just won't add up. Think Ben Carson and John Kasich. If they can't pull ahead now, they won't have another real chance to show their stuff.

If Super Tuesday is a numbers game for Republicans, it's even more important for the Democratic candidates. There are many different theories and predictions as to how it could all unfold for former Secretary of State Hillary Clinton and Vermont Sen. Bernie Sanders on Tuesday night, but in both candidates' cases, it would be a good sign to get an early jump on the competition.

Of course, they aren't taking any chances. Sanders' campaign has been making the rounds in the media this weekend, saying that even if he loses in most states on Super Tuesday, he could still win the nomination.

NPR this week broke down five likely scenarios for the Democratic nominees on Super Tuesday that would end up with neither having enough delegates to win the nomination out of the gate. On the opposite side, it's pretty likely that Republican who comes out on top on Super Tuesday will likely be the nominee for the party.

If you're getting nervous about certain frontrunners — never fear. There are still instances of nominees who won Super Tuesday but didn't take the White House in the end, though they're few and far between at this point. The only way to feel better about who gets the nomination, for either party, is to actually go out and vote.