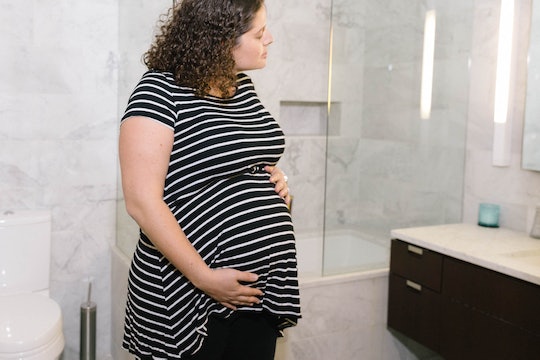 Um, Apparently Your Mucus Plug Can ~Regenerate~ & Here's What You Need To Know

My first labor started with my water breaking. It wasn't until hours later, after having my membranes stripped and using a breast pump, that contractions began, and I can't remember noticing a mucus plug. So when my second pregnancy's due date crept up, I had no idea what to expect. When I woke one morning to what sure looked like a "bloody show," I called my mom and told her she'd better come soon. When contractions finally started — ahem — over a week later, I definitely lost my plug. So what gives? Can you lose your mucus plug twice, or did I just misread it the first time?

Surprisingly, science proves that your mucus plug can regenerate — sometimes even more than once. According to Dr. Jamil Abdur-Rahman, OB-GYN and medical blogger at Twin Doctors TV, "The mucus plug is a collection of mucus that is lodged and then hardens in the cervical canal during pregnancy." Abdur-Rahman tells Romper in an exclusive interview that, "As a pregnancy progresses and the cervix begins to dilate, the original mucus plug will often fall out."

But the story doesn't end there. He continues on to explain that the cervical glands keep making mucus after the original plug has fallen out, so a second, third, or even fourth plug can form.

You read that right. The party ain't over yet.

So what exactly is the purpose of this rather gross bodily function? I mean, there is a purpose, right?

Good news: Abdur-Rahman insists that this increase of cervical mucus is actually vitally important to your health and the health of your baby. "The cervix," he explains, "Which is the 'mouth' or the opening of the uterus, has glands that produce mucus during pregnancy. This mucus serves as both a mechanical and a biological barrier."

According to Abdur-Rahman, the mechanical aspect of the mucus plug is in its ability to stop infection-causing microbes from reaching the sterile intrauterine environment by literally blocking their way to the uterus. And biologically, he explains, the mucus plug is rich in immune defense proteins including leukoprotease inhibitor, lysozyme, lactoferrin, and neutrophil defensing. These proteins are toxic to many potentially infectious bacterial, viral, and fungal microbes.

Not bad for something that looks like what you find in your toddler's Kleenex in February. (I'm kidding, obviously. It probably has blood in it, too.)

So if you do lose your original mucus plug, should it give you an idea of when to expect labor to begin? Not really, research shows. The American Pregnancy Association has noted that while passing a mucus plug is a sign that your body is preparing for birth, labor could either be hours, days, or even weeks away, during which time it will often regenerate to continue the protective function.

And not all mucus plugs are created equal. The increase in cervical mucus throughout pregnancy, coupled with the possibility of losing a plug gradually, means that some women never even notice it. On the other side of the coin, we may be too quick to jump to conclusions if we find some blood after a cervical exam or sexual intercourse, both of which have been proven to harmlessly rupture some cervical blood vessels.

When you're looking for any sign of impending labor, it's easy to jump to conclusions. But a little blood after these events is not the same as losing a mucus plug, and even if it coincidentally does happen at that time, there's no guarantee your body won't reform a new one. The only way to predict labor, unfortunately, is when you finally get to start timing those contractions. Until then, all you can do is wait.

More Like This
22 Valentine's Day Pregnancy Announcement Ideas Sweeter Than Candy
Fun, Sexy Maternity Lingerie, For When The Mood Strikes
Sweet Names For Brothers That Aren’t Too Matchy-Matchy
20 Baby Names You’ll Love If You Love Hazel
What Parents Are Talking About — Delivered Straight To Your Inbox