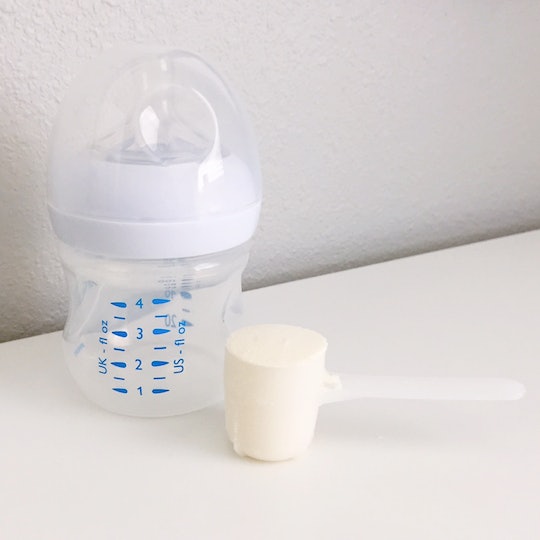 Can You Pace Feed With Formula?

It can be difficult to feed exclusively from the breast, especially if you work or have to spend several hours away from your baby. Many breastfeeding moms who alternate between the breast and the bottle have implemented a method known as paced bottle feeding. This is a technique which allows the baby to take some control over how much they drink. Moms will typically bottle feed with expressed breast milk, but can you pace feed with formula?

First, it's important to learn a little more about pace feeding. The paced bottle feeding technique was developed as a way to mimic the feeding patterns that a baby would find at the breast, as well as to help prevent overfeeding, according to Lansinoh. Bottles traditionally offer a faster milk flow, which has caused babies who alternate between the bottle and the breast to reject the breast due to its slower flow.

A lactation handout provided by the doctors at Forest Lane Pediatrics in Texas noted that pace feeding involves feeding the baby in an upright position, holding the bottle horizontally to control the flow, and listening to the baby's suck and swallow pattern. When pace feeding, your baby should be taking a breath every third to fifth suck. If this doesn't happen, you should remove the bottle and take a three to five second pause to allow the baby to breathe. These pauses mimic your natural letdown patterns, according to Kelly Mom.

Caregivers who practice pace feeding look to the baby for hunger and satiation cues. A baby who is hungry may root, stick out their tongue, or bring their hands to their mouth. Alternately, Forest Lane Pediatrics noted that a baby who is satisfied may fall asleep, turn their head, stop sucking, let go of the nipple, or purse their lips.

The website for Mother Love suggested that pace feeding supports a mother and child's breastfeeding relationship and eases the transition back and forth from breast to bottle. But, does that mean you can only pace feed with breast milk? According to Healthline, the answer is, no. Pace feeding can be practiced using formula or expressed breast milk.

In fact, moms who exclusively formula feed can benefit from this method, as well. Mama Natural noted that faster flow of traditional bottle feeding tends to fill a baby's belly before the signals of satiety can reach their brain. With pace feeding, babies better learn to recognize when they're full which is a healthy skill for all babies to have – no matter if they drink breast milk, formula, or both.