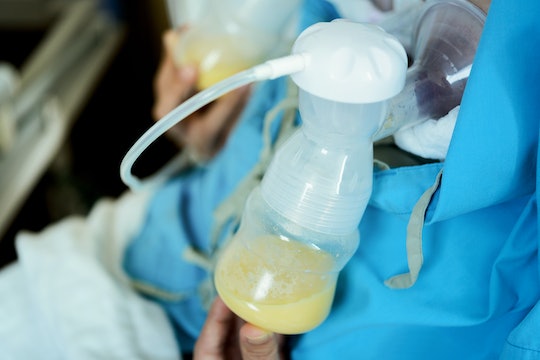 Before You Start Pumping A Supply Of Colostrum, Here's What You Need To Know

Colostrum, otherwise known as liquid gold, is those first drops of milk you produce before the real stuff comes in. To listen to some people talk about it, you would think it's the mystical cross between the best spell ever uttered at Hogwarts and all the miracles of modern medicine. While it's not a magic potion, it is really good for your baby. But can you pump your colostrum, or is it only available to your baby through breastfeeding?

You absolutely can express colostrum without breastfeeding, but maybe not in the way you're thinking. The early precursor to milk is a bit more complicated to pump than the more liquid milk you'll produce later on. Colostrum is a very easily digestible form of milk that's high in protein, carbohydrates, and antibodies that help prepare your baby for life on the outside, according to La Leche League. It's also very sticky, and a lot thicker than regular breast milk. When it comes to expressing this antibody-filled sticky wonder food, you might be tempted to break out the double electric pump to really get every last drop, but that might not be the best idea. According to breastfeeding website KellyMom, hand-expression is often the best and easiest way to manually pump colostrum in the early hours after birth.

Hand expression can seem strange at first — you're basically milking yourself — but I promise, once you get the hang of it, you'll be glad you've learned. It's a super handy technique to use when you're engorged or have a plugged duct, too.

I spoke with mom and maternity nurse Amber Taylor and asked her about what she's seen and what works when it comes to pumping your colostrum. She tells Romper that when it comes to using a breast pump, "it's possible [to pump colostrum], but on the floor, we always try to get our mothers to start the process with manual stimulation. For some reason, it just seems to work better." Taylor says she has seen this time and time again. While hospitals may have some seriously powerful and pricey pumps for you to use while you're there, machines can't always get the job done as efficiently as good old woman power.

"After the first couple of days though, by all means, switch to the machine, and pump often if you're not nursing," Taylor says. KellyMom suggested that you pump eight to 10 times per day, writing that you should "pump for 30 minutes per session, or for two to five minutes after the last drops of milk." But when you're hand expressing, it might take a bit longer to get things started, says Taylor. "Your nurse or lactation consultant should be able to help you learn the technique. It's going to be a learning process, and it will probably take you a while to get the right rhythm down for optimal let-down of your milk." It can also just get really tiring, I'm not going to lie.

You might have heard about women who can express colostrum before giving birth, and there is some science behind the practice. According to the Diabetes and Antenatal Milk Expression study, women who have diabetes are often encouraged to express colostrum in the last weeks of pregnancy. That's because their children are sometimes born with acute hypoglycemia and require the immediate, additional nutrition that colostrum can provide, according to BMJ.

This is a very specific set of circumstances, and should not be a unilaterally adopted practice due to an increased risk of preterm or early labor, noted the journal. Researchers wrote that you should only attempt to express colostrum before your baby is born under the close supervision of a doctor, and only at their suggestion.

As for the rest of us just trying to eek out some super juice for our babies after they're born, it's all hands on deck. By all means, talk to your nurses or your lactation consultant if you plan on attempting to express colostrum. They can help you work it out, and hopefully, bottle a little bit of that liquid gold for your baby.