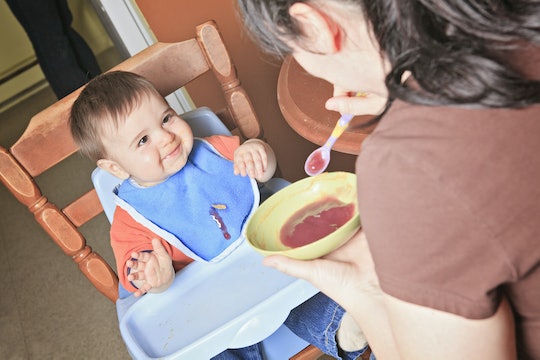 Can You Put Coconut Oil In Baby Food?

Introducing new foods to your baby is a fun aspect of parenting. Watching your kiddo's initial reaction to apples, bananas, and avocados can be pretty entertaining. However, you're probably concerned about the safety of these early foods, given the prevalence of food allergies. With this in mind, can you put coconut oil in baby food? It's most likely safe, but there are a few precautions to keep in mind.

Although coconut oil has exploded in popularity in recent years, there is not a tremendous amount of research on its safety for infants. For what it's worth, the research I could find tended to center around its use as a topical treatment. As explained by a 2015 study in Journal of Tropical Pediatrics, coconut oil applications were recommended to improve the skin maturity of preterm babies with a low birth weight. Basically, coconut oil is safe to apply topically to this particularly vulnerable group of infants. What about eating it, though?

In general, feeding your baby coconut oil does appear to be safe, although more research may be needed to fully understand its health benefits for infants. Because coconut is sometimes an ingredient in infant formula, this speaks to its relative safety as a baby food. What's more, allergic reactions to coconut are rare, according to the Australasian Society of Clinical Immunology and Allergy (ASCIA). As further explained by the ASCIA, infant formula containing coconut reportedly caused one case of stomach upset. Chances are, your little one will be able to eat coconut oil with no problem, especially if no other known food allergies are present.

If your child does have a known nut allergy, then is coconut oil off the table? Unfortunately, there is not a simple answer to that question. Although an allergic reaction to coconut oil is extremely rare, it isn't impossible, according to the American Academy of Allergy Asthma & Immunology. Because food allergies are a complicated topic to say the least, getting your child evaluated by an allergist-immunologist is the safest route by far. Hopefully, your baby will be able to enjoy the delicious, tropical treat that is coconut oil with no problem.