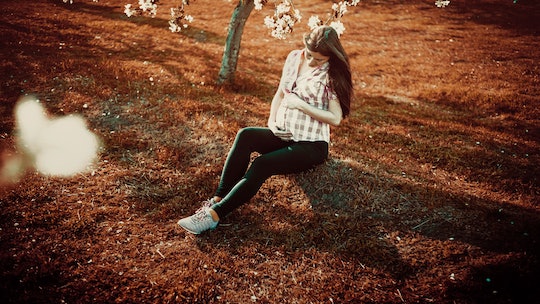 Can You Reduce Your Baby's Risk Of SIDS While You're Pregnant?

Very little is as frightening to a new parent as Sudden Infant Death Syndrome, or SIDS. The fear that their baby may suddenly stop breathing will keep new parents awake all night watching for the rise and fall of their baby's little chest. There are plenty of recommendations on how to reduce your baby's risk after he or she is born, but can you reduce your baby's risk of SIDS while you're pregnant?

One of the most important things a pregnant mom can do to prevent SIDS (which is sometimes still referred to as "crib death") is to get regular prenatal care, according to the Eunice Kennedy Shriver National Institute of Child Health and Human Development (NICHD). Prenatal care isn't only about monitoring your pregnancy and the health of your unborn baby. Prenatal visits are also an opportunity for your healthcare professional to discuss the measures that you and your child's other caregivers can take to ensure your newborn's safety. Moms who receive little to no prenatal care often have no idea that a baby should only be placed to sleep on his back, or that pillows, blankets, crib bumpers and a soft mattress can increase the baby's risk of suffocation.

Another way a pregnant mother can reduce her baby's risk of SIDS, according to NICHD, is to avoid smoking while pregnant and keep away from second-hand smoke, as well. According to a study on infant morbidity in relation to smoking, the researchers found that 23.2 to 33.6 percent of SIDS cases were attributable to prenatal smoking. Smoking while pregnant is related to a myriad of health issues for a baby, including preterm birth and low birth weight, which increase a baby's risk for SIDS, according to the University of Rochester Medical Center.

Drinking alcohol while pregnant also increases your baby's risk for SIDS. According to What To Expect, an Australian study that spanned 22 years found that babies born to moms who drank alcohol during pregnancy had a seven times higher risk of SIDS. The researchers believed that when a baby is exposed to alcohol during pregnancy, parts of the infant's brainstem that regulates breathing and other body functions can be damaged in utero.

Although SIDS is unpredictable, it's important for moms, both during and after pregnancy, to avoid engaging in behaviors that have been linked to infant deaths.