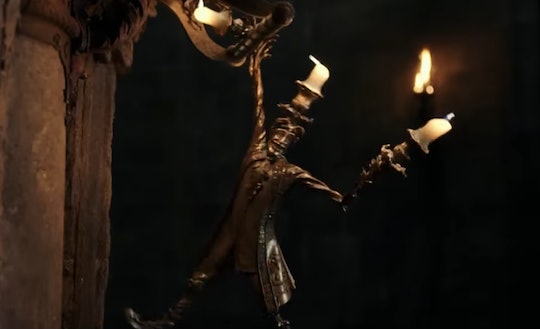 Want To Rewatch "Be Our Guest"? You're Not Alone

Disney's new live-action remake of the 1991 classic, Beauty and the Beast, has been a long time coming. With Emma Watson taking the lead role of Belle, the buzz over this new adaptation has, unsurprisingly, been deafening. Of course, it doesn't hurt that there's also a new musical number, an update on the classic, "Be Our Guest," which has been causing quite a stir, in the best way. So, can you rewatch "Be Our Guest"? The Beauty and the Beast scene had just about everyone talking, but unfortunately, you might have to wait (or buy another ticket for movie screening number two... or three).

The film, which premiered in theaters all over the United States Friday, has received pretty solid, albeit mixed, reviews. However, perhaps the most enigmatic element of the new film has been its musical numbers, especially those with any "Martha Graham, West Side Story, Singing in the Rain, and Bollywood" influences, as director Bill Condon described them. Remaking such a popular film obviously comes with its own set of challenges, and taking on challenges like revamping a beloved musical number definitely isn't easy. But this new rendition of "Be Our Guest," hit it out of the park and has such a catchy tune that you'll be wanting to watch it on repeat for days to come.

For now, unless you're willing to buy another ticket (and let's face it, it's probably worth it) you'll just have to do with a simple audio version of the song. Disney has yet to release a clip of the actual scene from the movie, it did upload an audio clip of the updated song onto YouTube, which you can listen to (probably on repeat, am I right?) below:

As you probably can tell by now, the newer version of the timeless tune definitely takes on a funkier, Bollywood-inspired vibe, and if you haven't seen the movie yet, you can just imagine what that might look like on the big screen (hint: it's pretty awesome).

Of course, lives get hectic, and schedules can become totally crazy, so if you can't make it to the theater anytime soon to catch the new film, there are other ways to cope. You can watch all the versions of the trailer (on repeat), follow Watson on Twitter, and stalk the film's Instagram page as well.

Oh, and the classic tune, "Beauty and the Beast," will also help get you in the mood. (John Legend and Ariana Grande are the musical powerhouses behind this particular rendition.)

Whatever you do, make sure to keep an eye on Disney's social media if you can't get enough of the many musical numbers — "Be Our Guest included — from the new Beauty and the Beast. Because the company will likely upload a clip of the scene there eventually, and when it does, you'll want to watch and rewatch a couple dozen times.