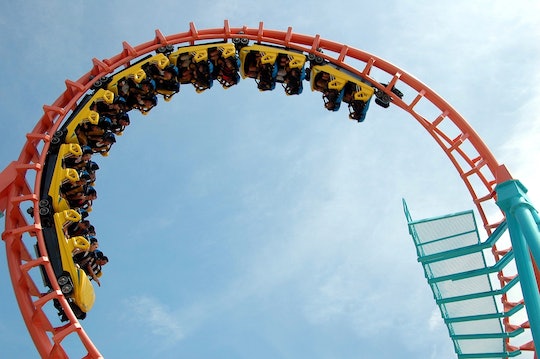 Can You Ride Roller Coasters If You're Pregnant?

Spending a day at an amusement park with your family and friends can be a lot of fun. You get to enjoy treats like cotton candy and funnel cake, you can try to win huge teddy bears, and you're surrounded by the electric exhilaration of the rides swooping around you. If you're looking for thrills, but are pregnant, you might wonder — can you ride roller coasters if you're pregnant? Unfortunately, it's probably not a good idea.

More Like This
Can You Go Down A Water Slide If You're Pregnant?
Pool Cannonballs Are Pretty Much A No-Go During Pregnancy
Lightning Crotch Can Actually Tell You These 7 Things About Your Pregnancy
Could Increased Anxiety Mean You'll Go Into Labor Soon? Experts Explain

According to the American Pregnancy Association (APA), riding roller coasters when pregnant is not recommended because the harsh forces and jerking starts and stops can lead to placental abruption, which occurs when the placenta prematurely separates from the uterus wall. The APA further noted that while there is no definitive study identifying problems with riding roller coasters during pregnancy, there are also no studies confirming their safety either.

These jarring movements are concerning because they have been associated with pregnancy trauma in other scenarios. Car crashes, according to The Mayo Clinic's Guide to a Healthy Pregnancy, have been known to cause placental abruption in some cases, and because of the similarity of forces in roller coasters, they should be avoided during pregnancy. In fact, most amusement parks will have signs posted outside of roller coasters and rides if they're considered unsafe for pregnant women.

If you have been on a roller coaster while pregnant, you should talk to your doctor, even if you feel fine, suggested Very Well, and if you feel sudden abdominal or back pain, vaginal bleeding, or continuous contractions, you should head to the emergency room.

The APA noted that while some pregnant women may have enjoyed roller coasters without any harm, it is still not advisable to do so. It's better to be safe than sorry, especially when you're pregnant. The best option is to wait until after the baby comes, and in the meantime, you can pig out on cotton candy, knowing your biggest prize is safe in your belly.