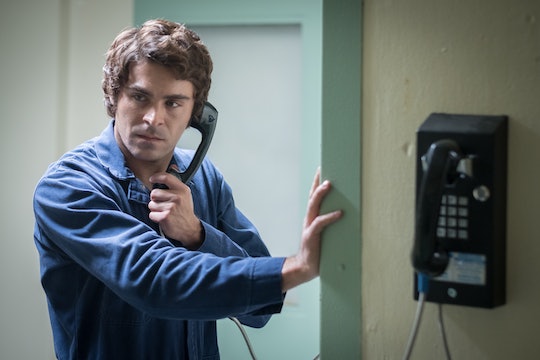 Just months after releasing the docuseries, Conversations with a Killer: The Ted Bundy Tapes, Netflix is dropping a new biopic about the serial killer, Ted Bundy. The Zac Efron starrer, Extremely Wicked, Shockingly Evil and Vile, which first debuted at the Sundance Film Festival, hits the streamer on May 3. But if you’re hoping to get a full cinematic experience, you may be wondering if you can still see Extremely Wicked, Shockingly Evil and Vile in theaters.

On May 3, the film will open in a few select theaters across the country, so you’ll need to check your local listings to see if it’s playing near you. According to IGN, filmmakers have plans to run the movie in theaters in to the summer, and possibly even give it another theatrical run during awards season in the fall. So, if you’re hoping to catch Extremely Wicked, Shockingly Evil and Vile on the big screen, you should keep an eye out for local theater schedules and timings.

With so much buzz around the movie and its notable cast — which includes big names like Efron, Lily Collins, John Malkovich, Jim Parsons, Haley Joel Osment, Kaya Scodelario, John Malkovich, and Angela Sarafyan — you might be wondering why it’s getting a streaming premiere. Well, in an interview with IndieWire, director Joe Berlinger explained why he felt his film was best suited for a Netflix release over a huge theatrical one.

“With Netflix, I can have my cake and eat it too: the idea of reaching audiences around the globe at the level Netflix has already delivered to my other projects outweighs the theatrical-first argument for me, with this particular film,” he said. “The absurdly high and to me unnecessary cost of releasing a film theatrically — I am told often $15-20 million is a minimum P&A spend for a viable theatrical release — means that a lot of movies often sink like a stone and are forgotten. I did not want to take that risk with this film. A lot of ‘indie’-style films by big name directors have not worked as theatrical releases recently, threatening the extinction of this kind of film. Netflix and other streamers have injected a new lease on life for these kind of edgy independent films.”

Berlinger also told IndieWire that the film is getting better marketing with Netflix, and that through its trailers, the streamer has been able to relay the spirit of the story to audiences in a more impactful way. He also told the outlet that unlike most serial killer movies, Extremely Wicked, Shockingly Evil and Vile tells Ted Bundy’s story from a unique point of view.

“While there have been many serial killer films that detail every aspect of the depravity of violence, I wanted to focus on how this disturbed serial killer used his charming skills as a master manipulator to pull the wool over the eyes of those closest to him and to prey on dozens of victims,” Berlinger said. “This is a portrait of seduction and betrayal by a psychopath, a portrait of pretending you’re one thing and having people believe you just because of how you look and act. It is a story of how the criminal justice system, the media and people very close to Ted, including the woman he was most intimate with, were manipulated by him.”

Extremely Wicked, Shockingly Evil and Vile premieres on Netflix and selected theaters on May 3.