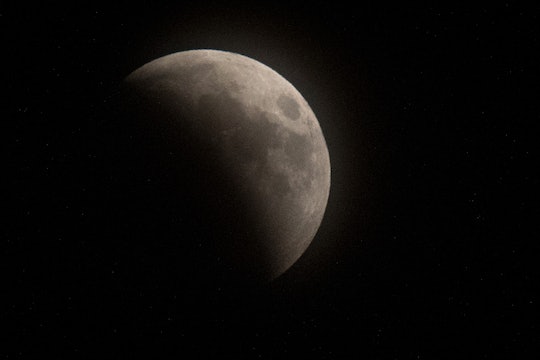 2019's Last Lunar Eclipse Is Happening Tomorrow, But Seeing It Might Be A Challenge

The night sky is getting ready to work some of its magic with a lunar eclipse coming up this week. From where you’ll be, can you see the partial lunar eclipse in July 2019? Unfortunately, unless you’re outside the United States on July 16, you’ll probably have to enjoy this one through photos and videos.

This eclipse on Tuesday — aka tomorrow, July 16 — will be the last lunar eclipse of the year, according to Country Living, but unless you’re in the eastern part of the globe, you’re likely going to miss it. It will be most readily visible across most of Africa, the Middle East, and parts of India, Country Living reported. The Royal Observatory Greenwich in London told The Daily Express that “some of the eclipse will be seen over parts of Europe, Asia, Australia [and] select parts of North America, South America, and Antarctica.”

Those parts of North America, however, are very select. According to a map of the eclipse track on TimeandDate.com, only the easternmost parts of Canada, as well as parts of the Caribbean islands will have even marginal visibility of the event.

That’s because of the position of the moon while the eclipse is going on, as amateur astronomer Stuart Atkinson explained on Facebook. Tomorrow night's eclipse "is going to be a bit of a 'challenge' (i.e. 'pig') to observe and enjoy because the eclipse will already be underway when the Moon rises, and the Moon still won't have climbed very high in the sky by the time the eclipse end," Atkinson, who lives in the United Kingdom, wrote on Facebook. "So, if you have trees, buildings or hills on your south-east horizon you might struggle to see it. But if have a clear horizon, or if you can get to somewhere with a clearer, better view it will still be worth watching, especially if you have a pair of binoculars or a small telescope to magnify the Moon and increase the contrast between the eclipsed part and the rest."

More simply put, as Space.com explained, "North America will be completely shut out" because "the eclipse occurs during the daytime with the moon below the horizon."

For a lunar eclipse, it’s the shadow of the earth that is being displayed on the moon, with the sun shining behind the earth. When the earth, moon, and sun are perfectly aligned it creates a total lunar eclipse, according to Firstpost. With a partial eclipse, the moon is passing through the edges of the earth’s shadow, called the umbra and penumbra.

A NASA model shows that the greatest eclipse will take place at 9:31 p.m. UTC on July 16. (You can find your local time translated from UTC here.)

Ironically, this week also marks the 50-year anniversary of the date American astronauts first walked on the moon, which happened on July 20, 1969. So whether you can see it eclipse or not, get out there and take a moment to appreciate the moon and all that it means.