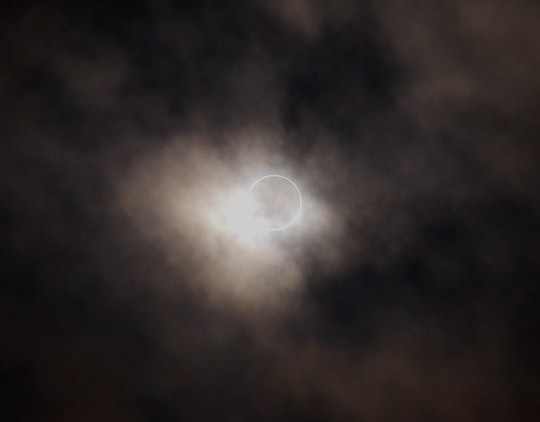 Can You See The Solar Eclipse If It's Cloudy? Science Explains

Millions of people are gearing up for the upcoming total solar eclipse on Aug. 21, the first viewable in the U.S. since 1979. You've likely scoped out the best viewing area near your home months ago (or if you're like me, you Googled it just now), and as you're purchasing your eclipse glasses or preparing your pinhole projector, you might be keeping an eye on the weather. Maybe it won't rain, but what if it's overcast? Can you see the solar eclipse if it's cloudy?

According to CBS News, data shows that the clearest skies this time of year tend to be toward the northwest side of the nation (around 20 percent in Wyoming), with cloud covers increasing as you move east with about 70 percent cloudiness in Nashville and Charleston. Still, the chances of totally missing an eclipse due to weather is only about one in eight.

The American Astronomical Society (AAS), a subdivision of the National Science Foundation, noted that even though the ideal viewing experience would include a clear shot of the gossamer corona (the outermost rim of the sun, only truly visible when the sun is totally eclipsed by the moon), what you should be seeking is "experience totality," rather than "see totality."

The thing is, as AAS mentioned, a total solar eclipse is a phenomenal experience that overwhelms your senses, and even in the most ideal conditions, you'd never be able to take everything in — something would always be missed.

According to NASA, on a scale of one to 10, total eclipses are a million, and this is true even if the eclipse is almost totally clouded out.

Weather is weather, after all, and there's no real way to predict if it's going to be cloudy on Aug. 21 wherever you're viewing the eclipse. But, clouds or not, it's likely to be an unforgettable experience.