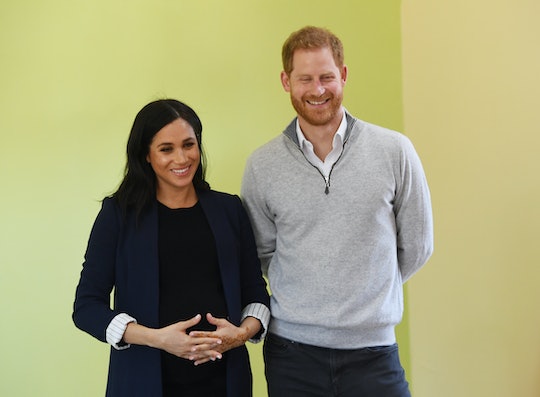 If You Want To Send Baby Sussex A Gift, Meghan & Harry Have A Wonderful Idea

People across the globe who are counting down the days until the newest royal baby is born. Prince Harry and Meghan Markle are expected to welcome their first child together by the end of April, and people are so pumped, they're eager to send them gifts for their baby. For people wondering if they can send Meghan Markle and Prince Harry baby gifts, they might want to rethink it. The couple is now asking for donations to a few select charities rather than baby gifts. And given their royal platform, this decision makes a lot of sense.

Ever since the couple joined Instagram earlier this week, they are making good use out of the platform. And their post from Friday is especially sweet. In the new post, the couple announced that they were surprised by the #GlobalSussexBabyShower — a viral Twitter campaign where users donated money to three different charities in honor of the upcoming birth of baby Sussex, according to Town & Country. Not only were they blown away by the giving spirit of their fans, they were moved to see so much support towards their newest arrival.

Since Markle and Prince Harry probably have everything they need for their baby, the couple asked in their newest Instagram post that their fans should consider donating to four different charities if they feel compelled to buy them anything in honor of their child's arrival.

Why buy them another corgi onesie or rattle when others in need can benefit from the world's generosity, right?

Here are the four organizations that the couple has hand selected that help parents and children in need: Little Village, Well Child, Baby2Baby, and The Lunchbox Fund.

"The Duke and Duchess remain appreciative for your warm wishes and kindness during this especially happy time in their lives!," the couple wrote in a statement in the post. "Thank you for sharing the love."

For those having a hard time picking which of these four amazing charities to donate to, here's an introduction to each one.

Little Village is a charity based in London that is a resource for parents to get clothes, toys, and equipment for babies and children up to five years old. This allows parents who are in unforeseen circumstances — such as homelessness, unemployment, and domestic violence — to provide for their children no matter what. It's kind of like a food bank, but instead of picking up food, parents can pick up the things necessary to take care of their children. People in London can donate items themselves, or can donate money online.

WellChild is a charity aiming to provide children living with serious illness with the resources and medical help to get out of the hospital and thrive in their own homes. This is a charity that is close to Prince Harry's heart — he's a patron of the charity and has worked closely with them (he and Markle attended the WellChild awards in September and had the best time meeting with kids).

"WellChild's dedicated staff strives to ensure that their seriously ill patients have the best care possible, no matter what their situation or diagnosis," Prince Harry said of the charity. "What they do is quite remarkable. Their love and commitment to those they look after shines through as strongly as ever."

Baby2Baby is another charity helping families in need — they provide children under the age of 12, living in poverty, with basic necessities such as diapers and clothes. Those moved by the charity's mission can donate funds online.

The LunchBox Fund is a charity based in South Africa, that helps vulnerable children in South Africa get a nutritious meal at school every single day. This meal not only nourishes their bodies, but their souls, too — by being well fed, it encourages them to attend school and concentrate while they are there. Anyone who wants to donate to this cause can do so on The LunchBox Fund's website.

All of these charities are so amazing and so deserving. In lieu of baby gifts to the royal family, consider donating to people in need, at the request of the royal family themselves.