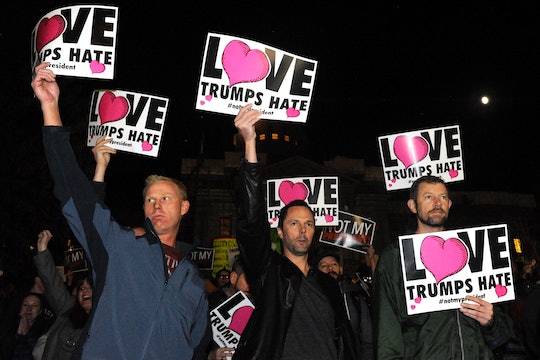 Can You Sign A Petition To Impeach Trump? Yes, But It's Unlikely To Work

More than two days after Republican Donald Trump was officially declared president-elect in a historic upset win over Democrat Hillary Clinton, the feelings of anger, hurt, and fear among much of the U.S. electorate show no signs of fading. In fact, efforts to stop a Trump presidency or put a quick end to his upcoming term are just heating up — and one of the myriad ways you can express your discord is to sign a petition to impeach Trump, which might help you feel a bit better even if, admittedly, such attempts are futile at this stage in the game.

After running a bitterly combative and negative campaign for the past 17 months, Trump's victory speech early Wednesday morning — during which he called for America to "bind the wounds of division" and "come together as one united people," according to transcripts — wasn't exactly taken seriously by Democrats, independents, or Republicans who cast a write-in ballot, crossed party lines to vote for Clinton or a third-party candidate, or abstained from voting for president altogether. According to the International Business Times, Google searches for “how to impeach a president” increased a whopping 4,850 percent just hours after Clinton conceded, and it didn't take long for dissenters to create petitions calling for Trump's impeachment on such websites as Change.org, MoveOn.org, and others.

The truth, however, is the U.S. Constitution outlines just one means of removing a sitting president, and a petition to impeach won't cut it. Actual impeachment proceedings, which have been initiated only twice in history, only begin if the House of Representatives ascertains the president is guilty of "treason, bribery, or other high crimes and misdemeanors," as per Article II of the Constitution. After this, the Senate holds an impeachment trial in which the president's fate is decided, necessitating a two-thirds majority to enact the impeachment. No president has been convicted by the Senate thus far, but Andrew Johnson and Bill Clinton were both found guilty by the House.

Although signing a petition to impeach Trump won't accomplish much on its own, researchers at the University of Utah claim a strong case for impeachment already exists, thanks to the president-elect's role in Trump University. In an analysis titled "Trump University and Presidential Impeachment," law professor Christopher Peterson wrote:

Unlike his promised crimes yet to come, the illegal acts in Trump’s high-pressure wealth seminars have already occurred. Indeed, a federal judge appointed under Article III of the U.S. Constitution has already determined that Trump’s alleged actions, if true, constitute fraud and racketeering.

According to LawNewz, Peterson argues the Constitution does not prohibit Congress from impeaching a president for alleged acts that happened prior to taking office. The president-elect is facing multiple lawsuits claiming Trump University tricked students into paying thousands of dollars to learn the secrets of the real-estate mogul’s success, a program that can be argued was a total sham. Trump has repeatedly denied the charges and is scheduled to be in court the Monday after Thanksgiving. He will appear before U.S. District Court Judge Gonzalo Curiel, whom Trump controversially referred to as biased during the general election because of the judge's Mexican heritage. In February, he told Chris Wallace of Fox News:

I think the judge has been extremely hostile to me. I think it has to do with perhaps the fact that I'm very, very strong on the border. Very, very strong on the border. And he has been extremely hostile to me. This is a case that in our opinion should have been won a long time ago. It's a case that we should have won on summary judgment... We have a very hostile judge. Now, he is Hispanic, I believe. He is a very hostile judge to me. I said it loud and clear.

What will happen during Trump's upcoming lawsuits — and whether they will result in his future impeachment — remains to be seen. In the meantime, however, you can make your feelings known by adding your signature to these petitions calling for Trump's removal from office, before he even gets there: