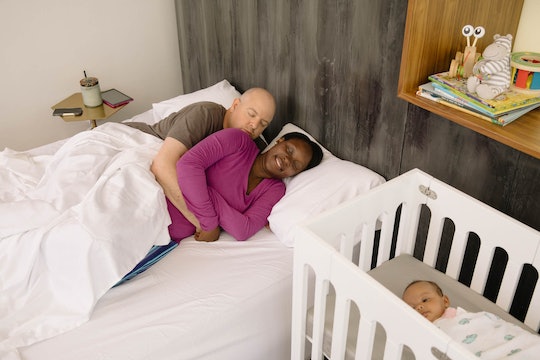 If You're Hoping For A Cat Nap While Your Baby's Awake, Here's How To Do It Safely

I've never been more tired in my life than during the first months of my son's life. His sleep schedule was hell. He suffered from reflux, so getting more than a few hours at a time out of him was very nearly impossible. I was probably a bear to be around, but I couldn't help it. There were times that I was so desperate for a nap, I'd do just about anything, including leaving my son in the crib while I rested if only for a minute. But is it safe? Can you sleep when the baby is awake?

There is no simple answer to this question, but it's an entirely reasonable and understandable question. Having an infant in the house is an exhausting marathon of diapers, feeding arrangements, soothing, burping, cleaning, and so on for what seems like forever. Never is the saying "the days are long but the years are short" more true than when you have a newborn. Which means you're tired, and you may be panicky about letting your baby relax alone (somewhere safe) while you nap. The American Academy of Pediatrics (AAP) doesn't have an official statement on sleeping while your baby is awake per se, but they do provide parents the best guidelines they can for safe sleeping practices, and it's easiest to start there.

This is one of those things that might be much easier said than done, and it might be a beautiful fantasy to live in for a few moments. There were times after having my children that all I could think about was getting just a moment's rest. Heck, now that they're 10 and 7, I still find myself longing for the same thing. It's one of the constants of parenting. The others are, of course, finding a bottle beneath your sofa, half-full of milk months after losing it, and that your child will have a blowout diaper when you're out on the one day you forget to pack an extra outfit.

The AAP wrote that to keep your baby safest while they sleep, or while they're resting, is to make sure their crib is free of extraneous items, they're lying on their back, that they share a room — but not a bed — with you, and that the sleep surface is firm and the sheet is tight. That could be a bassinet, a crib, or even something like a Pack 'N Play, which I used for my kids as a bassinet when they were small enough that they couldn't pull themselves to sitting. But can you sleep while they are in there awake?

I don't know the answer to this, so I spoke to private night nurse, Kate Jarrett. She tells Romper, "There's no right or wrong answer to this. While it's not the best idea, there are times when you could get so tired that you're no longer able to function properly, and a 10-minute power nap with your child awake in their crib would benefit you more than it would risk your child." She says that this is also something that just happens in the course of the day and night. "At some point, everyone will be asleep while their baby is awake, because no two people are completely in-sync." How else would your baby find the ability to creep out of their crib on suddenly silent feet only to appear at the foot of your bed and stare at you until you register their appearance and scream bloody murder?

Jarrett also argues that while you may want to sleep, it's highly unlikely that you'd be able to do so while you know your child's awake unless you've reached that point where your body is just shutting down. "If you get there, make sure your child is secure in a safe place like their crib, and set an alarm so that you don't fall into a deep sleep that's difficult to be awoken from. I would stay in the same room as the baby." She says that the older your baby is, the harder this will be and the more dangerous it is because they will be able to climb and get into shenanigans.

Parenting on little to no sleep is hard, and all parents have been there. Use caution and common sense, consider what the AAP recommends, and try to relax. Hopefully you'll both get a better night's sleep tomorrow.