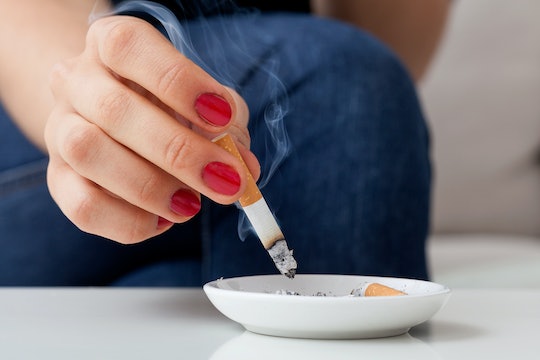 What Experts Want You To Know About Smoking While TTC

The decision to have a child is accompanied by lifestyle changes before, during, and after your pregnancy. Some women decide to forego things like coffee or alcohol before they even start trying to conceive while others wait until the positive pregnancy test. But not all changes are equally easy to make. Caffeine, for example, is addictive, as is nicotine. If you are a smoker, you probably already know that you should stop smoking during your pregnancy, but can you smoke while trying to conceive? "Women who smoke are 60 percent more likely than nonsmokers to be infertile," according to an article from TODAY. But what do experts say about smoking while trying to actually get pregnant? Romper spoke with Dr. Mary O’Toole, an OB-GYN at Saddleback Memorial Medical Center in California, about the effects of smoking on your ability to conceive and how you can quit if you want to.

Over email, Romper asks O'Toole how smoking cigarettes affects fertility. "Smoking may affect different stages of reproduction, including hormone production and embryo transport. Additionally, smoking may affect ovarian reserve and the quality and quantity of the eggs. Smokers may also have a lower rate of fertilization during in-vitro cycles and may have increased risk for miscarriage in an IVF pregnancy." On the positive side, "fertility will improve after quitting tobacco use," O'Toole says.

While many smokers have switched to e-cigarettes because they are purportedly healthier, O'Toole cautions against e-cigarette use because "smoking e-cigarettes may affect the developing fetus's brain and lungs." Romper also asks O'Toole about marijuana, since it is now legal for recreational and medical use in some states. "Smoking marijuana may affect a woman’s menstrual cycle and the development of the gas and the quality of the eggs," O'Toole says.

Another problem with continuing to smoke while you are trying to get pregnant is the likelihood that your smoking habit will overlap with at least part of the beginning of your pregnancy. According to O'Toole, "A woman may be at risk for complications in the first few weeks of pregnancy if she smokes while trying to conceive due to exposure to harmful chemicals like carbon monoxide and limitations on nutrients and oxygen to the developing embryo. Possible risks include miscarriage, placenta previa, preterm labor, and preterm birth."

So what's the best way to give up the habit? "The best method for quitting is quitting," she says. "Even cold turkey is not dangerous to the mom or the developing fetus. One may reduce tobacco usage and taking extra vitamin C may reduce the harmful effects of the chemicals on the fetal lungs. It is best not to use any medication and it's helpful to get rid of smoking paraphernalia and avoid situations that are associated with tobacco use. Eat healthy snacks to avoid cravings for tobacco. One may use nicotine gum lozenges, too."

Acknowledging that smoking is a difficult habit to quit, O'Toole notes that "counseling is very helpful along with nicotine replacement. A woman may also consult her physician about use of an antidepressant." Overall, says O'Toole, "We advise optimizing your health prior to getting pregnant. This includes healthy lifestyle, regular exercise, folic acid, balanced diet, and stopping use of tobacco or marijuana. It is extremely important to stop use of tobacco before attempting pregnancy. It can definitely be difficult, but the entire family will benefit ultimately."

If you know you want to have a baby, talk to your healthcare provider. They should have some tips on getting healthy, quitting smoking, and preparing your body for pregnancy.