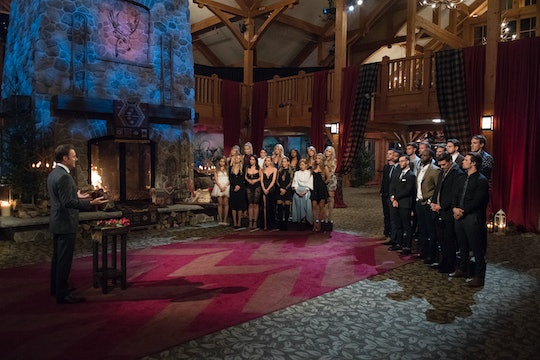 Yes, You Can Actually Stay At 'The Bachelor Winter Games' House & Here's How

The Bachelor Winter Games is underway in the Green Mountains of Vermont, where Bachelor and Bachelorette alums from international and domestic versions of the series will ski, snowboard, and ice dance their way into each other's hearts. Competitors are staying at a super fancy resort called The Hermitage Club at Haystack Mountain, but can you stay at The Bachelor Winter Games house? Even though the ski facilities they use are part of a private club, you can still book a room in The Hermitage Inn.

Skiing at Haystack Mountain and access to the exclusive clubhouse is accessible from The Hermitage Inn via ski lift, but membership at the club will run you about $53,000, plus annual dues. If you're willing to forego the winter sports and cozy chalet, however, you can book a room at one of the three properties belonging to The Hermitage Inn starting at $165 a night. The Inn consists of The Main House, where accommodations are the least expensive, the Wine Wing, where rooms start at $330 a night, and the Carriage House, where accommodations start at $363 a night. The Main House is a farmhouse dating back to at least 1842, according to The Hermitage Inn website. The Wine Wing and Carriage House were added onto the property later by subsequent owners.

And even though you may not be able to afford access to the ski slopes, staying at the Main House includes access to its restaurant, Tavern Bistro, a game room, an art collection by Michel Delacroix, and a wine cellar. The Wine Wing boasts its own game room, sauna, and hot tub, plus easy access to the backyard, where you can do outdoor activities like ice skating and snow tubing. And the Carriage House is closest to the barn and horse pasture, where the farm's Percherons Will and Bill live. (You may spot them giving The Bachelor Winter Games contestants sleigh rides around the property.) The Carriage House has its own common area, kitchenette, and pond, and access to hiking and biking trails.

You can already tell from The Bachelor Winter Games that the accommodations at The Hermitage Inn are simultaneously swanky and cozy. And, of course, the Winter Games contestants get to access that beautiful mountain and the Clubhouse, too.

By day, contestants compete for date cards in traditional Winter Olympics events, like the winter biathlon and a round of ice dancing guest judged by legendary Olympic figure skater Nancy Kerrigan. By night, they're flirting Olympic Village style, hoping to strike up a romantic connection strong enough to get a rose and stay in the competition another week.

The four-episode spinoff is sort of like Bachelor in Paradise, except with the added sports element, international contestants, and no bikinis. Just kidding, of course there are bikinis! There's a hot tub, sauna, and spa on the property after all.

The Bachelor Winter Games was conceived to play opposite the 2018 PyeongChang Winter Olympics, which is sort of unusual. Networks typically load up a block of reruns to air during primetime when the Olympics are on instead of bothering to compete with NBC, the exclusive carrier of the Olympic Games. But ABC decided to try its hand at competing with the Olympics this year by capitalizing on its reality ratings powerhouse. The network obviously hoped Bachelor Nation would find Ashley I.'s tears more compelling that real speed skating.

The Bachelor Winter Games is super gimmicky for sure, but the excitement of the Olympics does tend to wane after a couple of weeks, so it's nice to have something to switch over to during the umpteenth medal ceremony.