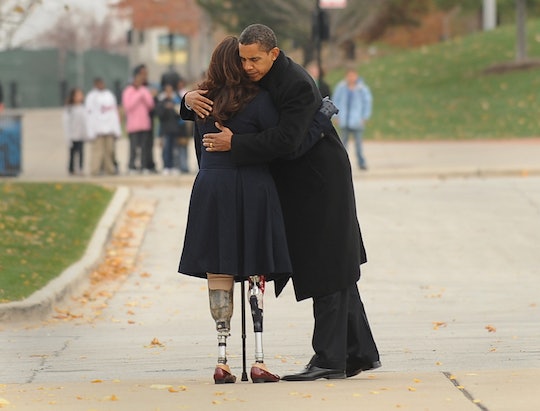 Good Luck Getting A Ticket To Obama's Farewell

On Saturday morning in Chicago, thousands of Obama supporters gathered, hoping to get one step closer to seeing the president's farewell address live and in person, according to local media. So many people had started to wait in line, in fact, that just three hours after the tickets officially went on sale, officials were already cautioning latecomers — if you could even call them that, given the hour — not to waste their time standing in line, as most tickets were already spoken for. So many had hoped for the chance to see Obama's last Presidential speech that those who weren't able to nab their own on Saturday are likely wondering if they can still get tickets to Obama's farewell address, or if their luck has already run out. The short answer? Yes. But it'll cost you.

As Obama's second term has slowly but surely been coming to an end, his approval rating has shot through the roof, reaching a record high during his second term. Because of this, and because of the widespread anxiety of a Trump presidency, it's no surprise that tickets to see Obama speak one last time as our nation's president are in high demand.

Such high demand, in fact, that The Chicago Tribune reported that "within hours of the 11 a.m. closing, tickets were popping up on the secondary market, including a pair of tickets that were being sold for $10,000 as of 1 p.m. [CT]."

Unfortunately, it seems that scouring Craigslist, Facebook, and other buy-sell groups is your best bet for tickets to the event, and even then, you should proceed with caution; While the tickets state that they aren't for resale, that hasn't stopped lucky ticket holders from attempting to actually make a sale. And if you end up on the wrong side of a scam and fork over too much money? You're out of luck. Usually, at that point, there's nothing you can do to get those funds back. (Ticketmaster has a few tips on how to avoid getting scammed, if you want a few pointers.)

While there may be a few kind souls who are willing to sell the tickets for a reasonable price, you'll be lucky if you can find a ticket for cheaper than $500 each at this point. Fortunately, though we all wish we could be there in person to bid the president farewell, there are other ways you can watch Obama speak, so rest easy.

Because so many of the people who got the tickets waited in line or hours, all while standing around in bone-chilling Chicago winter weather (bless you, brave souls), it's kind of hard to be too bitter at them for getting what we all want. Thanks to the beauty of technology, and the effectiveness of the White House team, there is a way for those of us who didn't brave the cold, and those of us without tickets or TVs, to watch the monumental address: It's going to be live-streamed, on the White House website Tuesday night.

While we still have 11 beautiful days left with this man as our leader, we're not ashamed that the ugly crying (maybe, probably) has already commenced.

Keep being you, Mr. President. We'll be watching your speech from all across the globe.