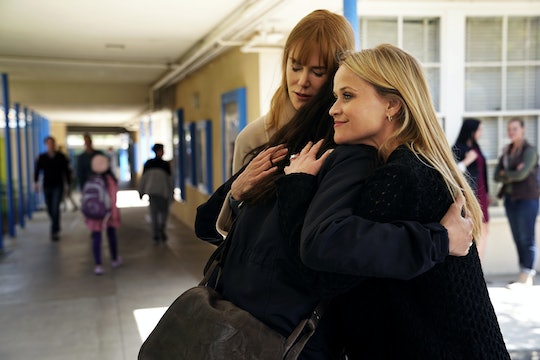 The return of Big Little Lies is the event of the year. Season 2 of the HBO hit is finally here and includes the entire original cast — Reese Witherspoon, Nicole Kidman, Shailene Woodley, Laura Dern, and Zoë Kravitz — with a "new" face in Meryl Streep. After the Season 1 finale that left everything unraveled, you won't want to miss where Season 2 picks up — especially since the Emmy-winning show was initially created as limited series, but became such a fan fave, they renewed for Season 2. So, can you stream Big Little Lies, or do you have to subscribe to HBO to get your fix?

Of course, if you have a cable package that includes HBO, there's your first option (but that's pretty obvious). The premium network offers a few way to stream the show, aside from the TV, via the website. Actually, if you want to catch the premiere, sign up for a free seven day trial. Just be warned: after the seven days are up, you'll have to pay $15 per month to catch the rest of the season. If you do subscribe, you also get access to HBO GO which lets you watch BLL on any device (yep — even on the phone, in the bathroom). That aside, if you don't already subscribe to the network, HBO Now offers unlimited viewing outside of your usual cable or satellite bills.

Those are pretty easy choices, but if you prefer to use another streaming service — or are already subscribed to one — here's what you can do. It'll cost $15 per month for Hulu, if you don't already have it, and you'll get to watch each episode as it airs instead of waiting a week or more for it to be added to the roster. This is another way to watch on any device, in case you're forced to take the iPad into the closet while your kids take over the living room on summer break.

For those of you into all things Amazon, Season 1 of BLL is already there for your streaming pleasure for free (if you're an Amazon Channel HBO subscriber). Even if not, you can still watch for $4 per episode. Apple users can log into iTunes and snag Season 1 in its entirety or only the episodes you love the most. Might I suggest the Season 1 finale where all the lies went down?

This is the part where, if you don't have HBO, I subtly suggest the other ways to watch BLL, because, if there's a will, there's a way. You should be aware, Season 2 will not be found on your beloved Netflix at this point, but the streamer does have Season 1. With the new content added on a regular basis, it's hard to say how long after the episodes air before Season 2 will join the ranks, so I wouldn't hold your breath. Additionally, if you have a smart TV, Apple TV, Roku, Chromecast, Amazon Fire TV or Fire Stick, you can hook up the HBO app, but still need to purchase a streaming service provider. Not much in life is free, TBH. With all the talk of how Season 2 will unfold, I'll take a chance and say those monthly fees will be worth it.

Regardless of how you choose to watch Big Little Lies, find a way. If all seven episodes from Season 1 are any indication of how Season 2 will throw down, it's going to be a spectacular event you won't want to miss. Plus, Meryl Streep.