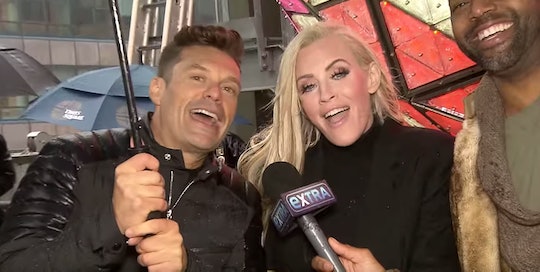 Even if you can't physically make it to New York City to watch the ball drop on New Year's Eve, it remains a tradition for many people across the globe. You know, just from the comfort of their living rooms. With an increasing number of families ditching cable, however, carrying out this tradition can be a bit tricky and may leave some curious if you you can stream New Year's Rockin' Eve 2020. Thankfully, there's more than one way to tune in this year.

Dick Clark's New Year’s Rockin' Eve with Ryan Seacrest airs on ABC on Dec. 31 starting at 8 p.m. EST. And the easiest way to watch the show without a TV — if you're a cable subscriber, that is — is to log into ABC.com or via the ABC app with your cable provider. (Or borrow a friend or family member's login info.) Likewise, you will able to stream it pretty easily on a TV with no network channels by simply downloading the ABC app on Roku, Apple TV, etc., and logging in.

This year's show is shaping up to be an epic one. Ryan Seacrest, of course, will be back hosting New Year's Rockin' Eve 2020. However, instead of Jenny McCarthy serving as co-host, viewers can expect to see Ciara, Lucy Hale, and Billy Porter co-hosting.

The lineup this year is one you won't want to miss, either. Among the headliners for 2020 are: Post Malone, BTS, Sam Hunt, and Alanis Morissette, in addition to the cast of Broadway's Jagged Little Pill, Billboard reported. Other performers include: Paula Abdul, Kelsea Ballerini, Blanco Brown, Dan + Shay, Green Day, Dua Lipa, Ava Max, Megan Thee Stallion, Anthony Ramos, Salt-N-Pepa, and SHAED.

If you want to see the ball drop — but not necessarily watch the New Year's Rockin' Eve show — you can simply visit the Times Square official website for a straightforward streaming option. There will be a live webcast directly on the website, for starters. Mobile streaming will also be available at NewYearseve.nyc, as well as at TimesSquareBall.net. Additionally, viewers can catch New Year's Rockin' Eve over on the Times Square Facebook page and on its Twitter page.

Whatever your NYE tradition happens to be, here's to a fresh start and plenty of memorable moments to come in 2020!