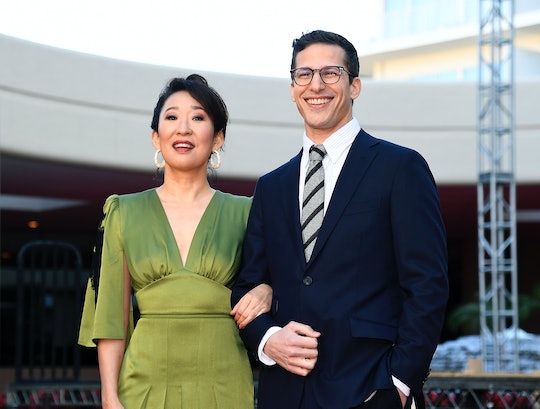 The Golden Globes is expected to be a killer show this year. From the A-list hosts to the A-list presenters to the A-list nominees, anyone who is a fan of celebrities or entertainment should find at least something to enjoy this Sunday night. That said, people who don't have TVs are likely wondering: Can you stream the 2019 Golden Globes?

Luckily, yes, there are a few ways to stream the award ceremony, which will air live on Sunday, Jan. 6. The ceremony will take place at the Beverly Hilton hotel at 5 p.m. PT, and it will air live coast to coast, so at 8 p.m. ET. If you have a cable provider login, you can stream the show via NBC.com/live, or on the NBC app, which is available to download for free. You can even download the NBC app onto your TV (as long as you have a streaming device, such as a Roku or Apple TV) and watch it on the big screen.

For those who do not have a cable login, NBC News reported that NBC's Facebook page will air a live stream of the Golden Globes, too.

And, as you can probably guess, those who do get network TV channels can watch the Golden Globes by simply tuning into NBC.

And you will probably want to live stream the show Sunday night, because so many amazing actors, films, TV shows, and more are nominated. As per the Golden Globes website, the five movies up for Best Motion Picture, Drama are: Black Panther, BlacKkKlansman, Bohemian Rhapsody, If Beale Street Could Talk, and A Star Is Born. And for Best Motion Picture, Musical or Comedy, the nominees are: Vice, Crazy Rich Asians, The Favourite, Green Book, and Mary Poppins Returns. That's a pretty diverse group of films — some came out nearly a year ago (for example, Black Panther came out in February 2018) and some only just came out (like If Beale Street Could Talk, which was released on Christmas).

And in the acting categories, so many incredible women are nominated for roles they played over the past year, on both TV and film. A few notable actresses nominated include Lady Gaga, Penélope Cruz, Rachel Brosnahan, Melissa McCarthy, Glenn Close, Constance Wu, Kristen Bell, Emily Blunt, Thandie Newton, Claire Foy, Regina King, and Sandra Oh, who is also hosting the award show, along with co-host Andy Samberg.

So make sure your laptop is fully charged, because you won't want to miss a minute of the 2019 Golden Globes.