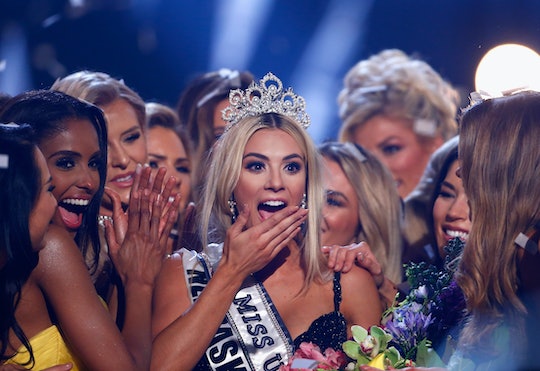 The Miss USA Pageant airs tonight, and this year, 51 amazing women from across the country will compete for the coveted crown. Nick and Vanessa Lachey are set to host the spectacular event, alongside fashion pros Carson Kressley and Lu Sierra. The preliminary rounds are already over, but if you want to see the final winner crowned live, you’ll want to know how to stream the 2019 Miss USA Pageant.

The show is being broadcast on Fox, so you will be able to stream it through Fox’s website with a cable provider login and password. The two-hour event begins at 8 p.m. ET, so if you are utilizing Fox’s one-hour preview pass (which allows free live streaming access without a login), you will need to login halfway through the show.

But, if you don’t have a cable subscription, don’t fret, because you can also stream the pageant through Hulu and Youtube TV’s live subscription packages. Youtube TV offers a monthly subscription of 70+ channels for $50 a month, and Hulu Live offers a similar package with 60+ channels for $45 per month. The good news is that both services offer trial periods which will let you to stream live TV for free for a limited time.

Now that you know where you can catch the event, let’s get down to the details. According to the pageant’s website, this year, the competition is being held at The Grand Theatre at Grand Sierra Resort in Reno Tahoe, Nevada and it will feature performances by Nick Lachey and T-Pain.

In an interview with E! News, Vanessa and Nick talked about their experience hosting the 2018 Miss USA Pageant, why they came back to host this year, and how being a married couple adds to the fun. “Last year was kind of our first thing we hosted together — we both hosted a bunch on our own,” said Nick. “It was like a natural chemistry that obviously you have together as a married couple. You’re really able to pick up each other and there are things that are just understood. We came away from it really feeling like it was a lot of fun, and obviously we didn't screw it up too bad...they asked us to come back.”

Vanessa — who won the title of Miss Teen USA in 1998 — told the outlet that there are many misconceptions about the pageant, but at its heart, it’s about much more than clothes and looks. “It is all encompassing,” she explained. “It is the woman that can hold herself, walk in a room, and also be able to have an educated conversation with somebody about her beliefs and what she wants to see change, or what she applauds that’s going on. But also, yes, wear that evening gown and gracefully demand the attention that she deserves. So that’s what they support and that’s what they empower.”

Luckily, for those who want to watch the glitz and glamour of the event, and see the winner crowned live, there are plenty of streaming options available.