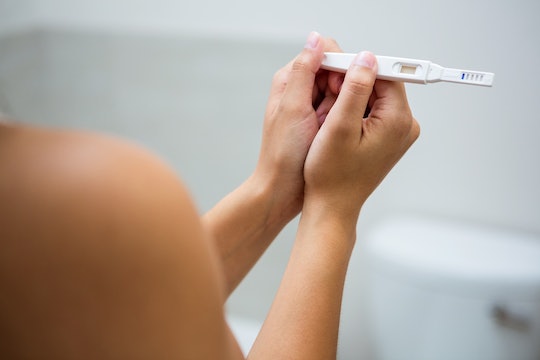 Can You Take A Pregnancy Test A Week After Sex?

Whether you're dying to get the pregnancy ball rolling, or desperately hoping to remain baby free, you might ask, can you take a pregnancy test a week after sex? It depends on where you were in your cycle when said sex took place, but really, a week is almost definitely too soon. Parents noted that pregnancy tests are reliable, but only if you get the timing right. If you take a pregnancy test too early, you'll likely waste money (those things aren't cheap), and a lot of nervous energy over nothing.

According to public health economist Emily Oster's book Expecting Better, you have basically zero chance of catching a baby for most of the month. The best chance of getting pregnant is on the day you actually ovulate, and there is almost no chance of getting pregnant after ovulation (because that egg-shaped ship has sailed). After implantation, it takes a few days for your body to produce detectable levels of hCG, the hormone that pregnancy tests rely on to give you the news.

In Jean M. Twenge's book The Impatient Woman's Guide to Getting Pregnant, she noted that many pregnancy tests claim to be able to detect your pregnancy six or seven days after ovulation. She cited a North Carolina study, however, that showed that even with super-sensitive lab tests, the earliest hCG could be detected was nine days post ovulation. Twenge further noted that if you're using a home pregnancy test, you shouldn't expect a positive result until at least 11 days after ovulation.

The first day of your period marks the first day of your cycle, and you'll likely ovulate around day 14, though that can vary one or two days in either direction. There's also a lot of variation among individuals, according to the American Pregnancy Association, and so counting 14 days from your period might not actually tell you when you ovulated. In general, however, expect to see the most accurate results from a home pregnancy test starting at around day 25 of your cycle.

Taking all this into account, it's pretty much impossible to get an accurate test result a week after you have sex. You might as well save the money and shake a magic 8 ball. I know it can be difficult to wait, but your patience will pay off. Eat some ice cream if you have to, and take some deep breaths. If you're trying to get pregnant and want to know exactly when you're ovulating, you can purchase an ovulation kit to really get down to business.