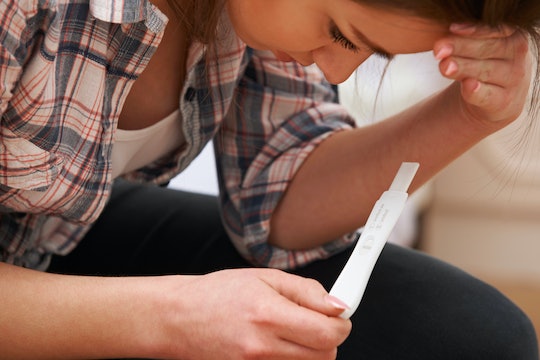 Can You Take a Pregnancy Test While Drunk?

Shots, shots, shots, shots — shoot. When was your last period? Your math may be a little off, but halfway through your night of drinking, you've realized you're late. Really late. Now that you're sweating and feeling just slightly soberer, you need to get to the drug store. But can you take a pregnancy test while drunk?

Why is it that so many of life's greatest revelations happen after a bottle of wine? Rumor has it that Hemingway wrote The Old Man and the Sea while he was swimming in rum. I know for a fact that the idea for the best cake I ever made came to me after entirely too many sidecar cocktails. So it's not surprising at all that you may in fact begin to think you're with child when you've been with Jim, Jack, and Jose.

But can you take a pregnancy test while drunk? Will it affect the results? More importantly, how's your aim? Are you willing to bet on actually peeing on a stick that challenges women who are stone cold sober? Think about it. You'll already be nervous, and alcohol increases the effects of anxiety, which won't help the already shaky situation. Also, your reasoning is foggy right now. You may not be late. You might not be assessing things properly. Step back for a moment and ask yourself if you think waiting makes sense.

But, if you absolutely must know, or you've already taken 16 tests and you're questioning the validity of the answer, rest assured that the U.S. Department of Health and Human Services noted that alcohol does not affect the accuracy of the test. So if you've got a flashing "pregnant," on your stick of choice, that means you've got a bun in your oven, and you need to put down the Jägerbombs. You've also probably got a bathroom that looks like you allowed three potty-training boys in there after drinking a ton of Gatorade, so you might want to take care of that while you sober up. (It won't be the last time you clean up pee.)

If you're worried about how your womb inhabitant is doing as you battle a hangover, try not to panic. According to Harvard, small amounts of alcohol in early pregnancy probably won't affect your health or your baby's health. But it might be time to start skipping the "shots, shots, shots" part of the evening. (Trust me, you'll be too exhausted anyway.)