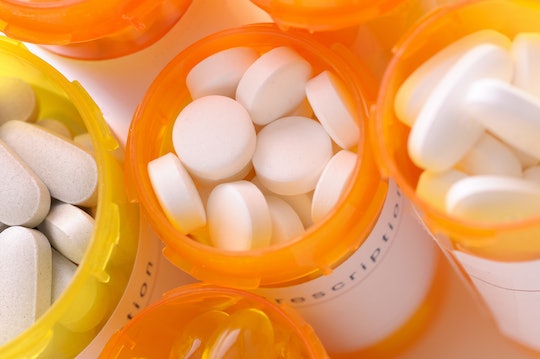 Moms Weigh In On Taking ADHD Meds During Pregnancy

When Julie Anderson*, 35 years old, learned that she was 10 weeks pregnant, she found herself grappling with a conundrum. She had taken medication to control her attention deficit hyperactivity disorder (ADHD) for years, but now that she knew she was pregnant, should she stay on the drugs, or go off them for the duration of her pregnancy? And beyond that question loomed an even bigger one: can you take ADHD medicine during pregnancy at all, in any instance? Is it even safe?

Today, many women like Anderson rely on medicine like Adderall, Ritalin, and Vyvanse to help them get through the tasks of their day-to-day lives, with an estimated 4 percent of adults taking methylphenidate (the generic term for Ritalin and Concerta), according to a 2012 National Survey on Drug Use and Health. Millennials have been deemed the "Ritalin Generation," and the rate of diagnosis for ADHD continues to increase by roughly 5 percent per year, according to the Centers for Disease Control.

But for many women like Anderson, who rely on the drugs to focus on everything from creating expense reports to cooking dinner, the decision of whether to continue taking ADHD medication while pregnant, breastfeeding, or trying to conceive can be a difficult one.

ADHD Medications' Effects On Pregnancy, According To Science

The fact is, there isn't a whole lot of research on how drugs like Adderall affect fetuses. That's because, while millions of children were raised on ADHD medications, with nearly 11 percent of American children being diagnosed with the condition as of 2011 per the CDC, many are just now deciding to start families. And compared to antidepressants like Prozac, there's much less research on how ADHD medications affect women during pregnancy.

Adderall is a stimulant, which enhances the effects of chemicals like dopamine and norepinephrine in the brain. Like cocaine and meth, which are also stimulants, drugs like Adderall also have high rates of abuse, but they can also improve cognitive function for those who suffer from ADHD. Many of the findings cited by doctors on Adderall and pregnancy stem from studies on stimulant drug abuse, and much of this research points to low birth weights, premature birth, and an increased risk of neonatal withdrawal symptoms as examples of the negative effects of Adderall during pregnancy. But smoking meth while pregnant is very different from taking a prescription for a low dose of Adderall.

Knowledge about the impact of these medications on the developing fetus is limited.

"Although there is a lack of data on the impact of ADHD on pregnancy, information from the general population has shown that ADHD can cause significant functional impairment," Dr. Katherine Martin, an assistant clinical professor of psychiatry at University of South Florida Morsani College of Medicine in Tampa, wrote in a case study on stimulant use during pregnancy. "There are very effective pharmacologic treatment options for ADHD. However, knowledge about the impact of these medications on the developing fetus is limited."

That's not to say there's absolutely no research on Adderall's effect on developing fetuses. Studies with small sample sizes have been conducted on animals, the results of which suggest that taking these medications while pregnant could result in a higher risk of birth defects and miscarriage. But it's unclear if these results apply to humans as well, especially those taking low dosages of the drugs.

Some Moms Choose To Stop

Despite the lack of research on ADHD medications' effect on fetuses, many moms opt to stop using the drug. Most pregnant women "are advised not to use it" by medical professionals, psychiatrist Eva Ritvo, M.D told Parents magazine.

"I did not want to be taking amphetamines while pregnant and put myself or my baby at unnecessary risk, even considering the lack of research," says Anna Smith*, a 29-year-old who's currently trying to conceive. (She prefers to remain anonymous, as she works in healthcare in a relatively small community.) "Guilt played a pretty significant role, too."

"The biggest challenge was psychological, in that I needed to trust that I could get through a day without the boost Adderall gave me."

Smith has been off Adderall for 13 months. While she initially found that she got tired more easily and was less detail-oriented, now she hardly notices the lack of meds in her day-to-day life. "I think the biggest challenge was psychological, in that I needed to trust that I could get through a day without the boost Adderall gave me," she says. "That fear was, in hindsight, completely related to the habit of taking Adderall and the feeling of security it gave me."

Smith is happy with her decision to stop taking Adderall while she tries to conceive. She says she has less to worry about in terms of following up with her physician and filling prescriptions, and she's also glad to step away from the side effects her meds gave her, such as a dry mouth and increased anxiety. "There's a stigma to taking Adderall, too," even for those who are not trying to conceive, said Smith. "I'll never forget meeting a new physician and telling her my only medication was Claritin when she was taking my history. I felt so relieved."

Anderson also decided to stop taking Adderall five years ago, after she found out she was pregnant. At the time, she was unemployed, which played a big part in her decision. "If I had been in school or working, the decision would have been much harder," she tells Romper. But the challenges were larger than she'd anticipated. She totaled her car when she was 6 months pregnant, an accident she attributes to being distracted while driving. She didn't get behind the wheel for another year.

Better she get a little stimulant in my milk than die in a house fire.

Anderson continued to stay off her medication while she breastfed her daughter. But she found herself forgetful and distracted. "I left the stove on a few times. I felt unsafe driving and I forgot [to take care of the] laundry and bills," she says. She knew something had to change. When her daughter started shifting to solids at 9 months old, Anderson started taking Adderall again, even though she was still breastfeeding. While there is even less research available on Adderall while breastfeeding, the journal Pediatrics published a report in 2013 that suggested prescription drugs rarely find their way into breast milk, and while taking Adderall may make it more challenging to produce milk, there is no strong evidence to suggest that it will harm your baby.

Anderson continued breastfeeding and taking Adderall until her daughter was 3 years old. She didn't notice a change in her daughter's behavior, and her pediatrician agreed that it was the right decision for Anderson and her family. "Better she get a little stimulant in my milk than die in a house fire," says Anderson.

Some Choose To Continue Taking Their Meds

Erin Jackson*, 32, is the mother of a 12 month old. She decided to continue taking Ritalin during her pregnancy after speaking with her psychiatrist. They both agreed it was the right choice for her. "He read all the studies and recommended a low dose as needed," says Jackson in an interview with me for Romper, who also took the antidepressant Zoloft during her pregnancy.

Though she is now prescribed 40 mg of Ritalin for her daily life, her doctor recommended she take half that as needed throughout her pregnancy. "It was not a difficult decision, but if my doctor or husband had had doubts, I would have taken them seriously," she said.

I could have lost my baby in my car accident, or I could have burned our house down cooking.

Jackson says she's happy with her decision to continue taking a low dose of her meds and credits her ability to remain positive and active during her pregnancy to the Ritalin. Plus, she believes her prescription continues to help her in her new role as a mother. "Without my medication, there was a much higher chance of postpartum problems [like the dangers that accompany the inability to focus: distracted driving, distracted cooking, etc.]" she says. "And so far, it has been fine."

If you're pregnant and on the fence about whether to continue your ADHD medication, it's best to talk to your doctor about the best choice for you, says Dr. Seth Plancher, an OB-GYN in New York in an interview with Romper. He adds:

ADD meds, like most medications, should be addressed on a case-by-case basis. Many women absolutely need them and need to weigh the benefits with the risks of what might happen if they stop them. Lowering the dosage doesn't make a lot of sense. If you are going to take it, then at least take the right amount that will offer benefits.

You can also perform a little cost-benefit analysis, says Smith. "Everybody's mind is unique, and only you know what's going to keep you healthy, safe, and functional," she says. "My doctors [both her psychiatrist and OB-GYN] were up front and explained that the research on human fetuses is not really there, but that they did not encourage continuing with Adderall unless the risks of stopping outweighed the benefits of abstaining."

Although taking any kind of medication during pregnancy is certainly controversial, ultimately the decision to continue or not to continue is a highly personal and individualized one. "ADHD doesn't just affect school and work," says Anderson. "I could have lost my baby in my car accident, or I could have burned our house down cooking. Some people function much better than I do, and they may not need Adderall during pregnancy. If I have a second [child], I will definitely take it [during pregnancy] so my older child doesn't suffer."

*Names have been changed