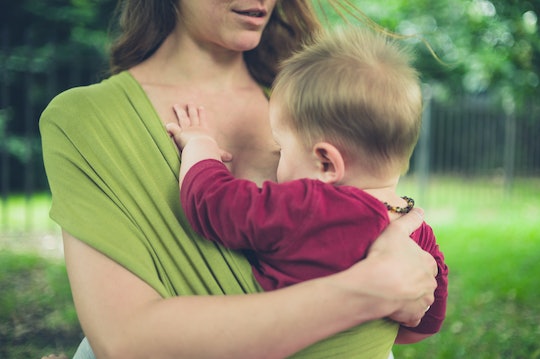 If You're Breastfeeding, Here's What You Need To Know About Antibiotics

Though breastmilk contains lots of good stuff that can benefit your baby's immune system, unfortunately it doesn't protect you, the breastfeeding mom, from getting sick. Yes, moms who nurse can suffer from infections just like anyone else, and when that happens they may be prescribed antibiotics to treat those infections. Should you be, though? Can you take antibiotics while breastfeeding or should you either switch to formula for a bit, (or worse, not treat the infection)? In many cases, antibiotics are prescribed to treat infections stemming from mastitis if they occur. (And who gets mastitis? Breastfeeding moms, that's who). But if you're committed to nursing your baby, or feeding your baby breast milk, you might have reservations about continuing to do so while you're on an antibiotic regimen.

The medical community believes quite strongly that most antibiotics (and most medications) are safe to take when you are breastfeeding. The official stance on medications and breastfeeding, supplied by the Center for Disease Control and Prevention's (CDC) website, is as follows: "Although many medications do pass into breast milk, most have no effect on milk supply or on infant well-being. Few medications are contraindicated while breastfeeding."

A 2013 study on the transfer of drugs into human milk, published in the American Academy of Pediatrics (AAP) News & Journal, explains how women who are advised to stop nursing when taking medications are given this advice because of the largely errant belief that the drugs may have negative effects on their babies. But as the paper points out, this notion is not based on scientific evidence, as there are limited animal studies to support it. As the paper explains, there would have to be clinically significant amounts of drug excreted into human milk in order for it to pose a threat to an infant, and not all drugs are excreted in this amount. As the Mayo Clinic's website explains, while nearly any drug that's present in your bloodstream will pass into your breast milk to some extent, most medications do so at such low levels that they pose no real risk to most infants.

Almost every professional source exploring the safety of medications and breastfeeding agrees that despite most medications being deemed safe, physicians should weigh the risks and benefits of each medication for the mother and baby and to consider several factors. One such factor, according to the Mayo Clinic, is if the benefit of continuing to take a medication for a chronic condition while breastfeeding often outweighs any potential risks it may pose to the baby. Another thing to consider is the age of the baby. The older the baby, the stronger their immune system.

For example, as the Mayo Clinic's website explains, a healthy baby 6 months and up can metabolize drugs better than a premie or a newborn. You also need to take into account how long a mother has been nursing. If a mother has been breastfeeding for a year, for example, she produces smaller quantities of milk, which in turn means less medication can be transferred to her breast milk. The same goes for medications taken in the first three to four days after childbirth, because you're not producing that much milk at that point, anyway. As the Mayo Clinic reports that doctors tend to be more cautious about medications and breastmilk when it comes to premies or newborns, however. Babies who are medically unstable or who have poorly functioning kidneys might also be affected by exposure to medication in breast milk.

Experts agree, that there are a few antibiotic medications that are definitely on the naughty list. According to BabyCenter, a class of antibiotics that doctors usually avoid prescribing to breastfeeding mothers are the quinolones. These drugs have been associated with tendon damage in adults.

A really helpful source, according to the the AAP's website, is the National Library of Medicine’s database, LactMed. Lactmed is a database that contains information on drugs and other chemicals to which breastfeeding mothers may be exposed, as well as their effects on nursing infants. According to Lactmed, for example, the antibiotic Fluconazole" is not only acceptable when breastfeeding, but it is prescribed for nursing mothers to treat breast candidiasis (i.e. thrush). Sometimes, the drug is given to both the infant and mother at the same time, especially if other treatments have failed to resolve the infection. Other antibiotics that are safe to prescribe to breastfeeding moms, according to The Mayo Clinic's website, include: Miconazole (Monistat 3, when applied in minimal amounts), Clotrimazole (Mycelex, also minimal amounts), Penicillins (amoxicillin, ampicillin, others) and Cephalosporins (Keflex).

If you are nursing, and you find yourself with an infection, or you think you might have an infection, don't freak out. Your doctor and/or your child's physician will help guide you through the choice that is in the best interests of both you and your baby.