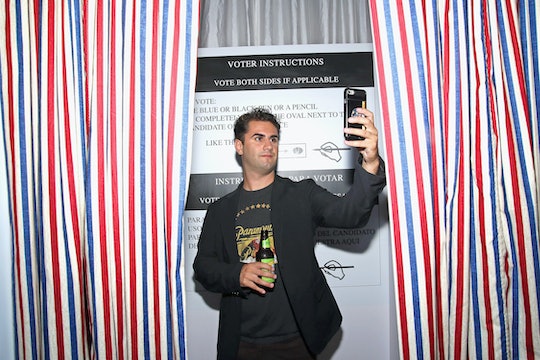 So you think you're ready to vote. You've researched the candidates. You've double-checked that your registration is up to date. You even figured out which precinct and district you live in, which you'll likely forget, but don't worry; the nice old ladies will look it up for you on election day. But are you sure you have all the information that you need? For instance, can you take pictures in the voting booth? It's a serious question: we take pictures of everything these days. We Instagram our meals and commemorate each mood with a selfie. I don't even get up to check if my son cleaned his room to my satisfaction anymore, I just hand him my phone and tell him to prove it.

And although a plastic study carrel inside a middle school gymnasium isn't the most appealing backdrop for a photo, lots of people have their reasons for memorializing their ballot. Maybe you wanted a souvenir of the day we elected our first Black president. Maybe it's about civic pride, and encouraging your social media followers to take part in the electoral process. Or maybe you just want to be able to prove to your grandchildren that you voted for Hillary, so none of this is your fault. I feel you.

But like so many other rules regulating voting, this one is up to the states, and the laws vary widely and change often. Last November, Newsweek published a breakdown of each states' laws, and concluded that 19 states expressly permitted photographing ballots: Connecticut, Hawaii, Idaho, Indiana, Kentucky, Louisiana, Maine, Minnesota, Montana, Nebraska, New Hampshire, North Dakota, Oregon, Rhode Island, Utah, Vermont, Virginia, Washington, and Wyoming. However, there are actually two more: the the California legislature voted to repeal that state's photo ban after the 2016 primary election, and the new law went into effect Jan. 1, 2017, according to KPBS San Diego.

And although Kansas law hasn't changed, it's been reinterpreted: in October 2016, a spokesperson for the secretary of state's office told Wichita's KWCH that "a picture of the actual ballot violates Kansas law," Elections Director Bryan Caskey told the station that after his office received numerous inquiries, they re-examined the law that makes disclosing a ballot's contents a felony, and determined that it was meant to apply only to to election officials, not voters. So go ahead and snap away, just don't go messing with someone else's.

In an additional 18 states, any sharing or recording of ballots is specifically outlawed. Taking a voting booth selfie in Alabama, Alaska, Colorado, Florida, Georgia, Illinois, Kansas, Massachusetts, Michigan, Mississippi, Nevada, New Jersey, New Mexico, New York, North Carolina, South Carolina, South Dakota, or Wisconsin could earn you anything from a slap on the wrist to three years in prison — or a $2,500 fine. In Massachusetts, for example, the law states that, "Whoever, at a primary, caucus or election ... allows the marking of his ballot to be seen by any person for any purpose not authorized by law" faces up to six months in prison and a fine of "not more than" $100, though I can't find any evidence of that law being enforced (which is reassuring, since I have absolutely taken a photo of my Massachusetts ballot in the past).

The remaining states — Arizona, Arkansas, Delaware, Iowa, Maryland, Ohio, Oklahoma, Pennsylvania, Tennessee, Texas, West Virginia — are a little looser with their voting selfie laws, but you still probably shouldn't risk it. Some, like Arizona, have laws on the books that prohibit photos within the polling place, but allow you to do whatever you like with an absentee ballot. Others have very old laws that aren't really enforced anymore, or ambiguous language about showing others how they voted, with no specific mention of photography. If you're still unclear on your state's law, you can always ask the election officials before going into the booth. However, I will point out that a lot of those booths have curtains and just leave it at that.

More Like This
'Operation Fly Formula' Begins With 78,000 Pounds Of Baby Formula
Lawmakers Passed Two Bills To Address The Baby Formula Shortage
New Dad Pete Buttigieg Shares Family’s Struggle To Find Baby Formula
Two Young Children Have Been Hospitalized Because Their Formula Is Out Of Stock