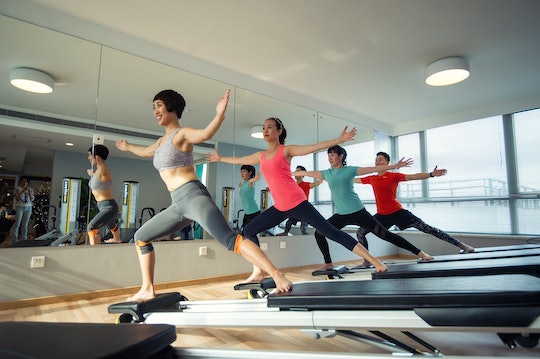 Can You Take Pilates If You've Never Done Yoga?

Admittedly, I love yoga. And by, "I love yoga," I mean I love their pants and tank tops. The exercise is alright, I guess. I mean, I do it, but mostly out of peer pressure. But I actually love pilates. Because the two seem to be so similar, I'm wondering, can you take pilates if you've never done yoga?

While yoga and pilates may seem to be two sides of the same coin, they're actually pretty different. Yoga is older than Jesus — literally. It dates from the beginnings of the Hindu religion several thousand years ago, according to ABC News. Princeton University scholar, David Gordon White wrote how the nature of yoga has changed from its roots as a divine meditation all the way to the posture and chant-based practice it is today.

For many, yoga is a deeply spiritual experience that is enhanced by the postures and chants. For other people, like me, yoga is the inverse of this — it's a system of stretches that benefits from meditation and chanting. It's 30 minutes in my day that I work all of the kinks out while also trying to release some pressure from under the old dura mater.

Pilates is an embryo in comparison. Developed in the early 20th century in a German internment camp on jury-rigged hospital beds in the UK by Joseph Pilates, it soon became popular in the dance community for its ability to stretch the body while increasing strength and stamina, according to Balanced Body. Having no origins in yoga, Pilates took what he learned from gymnastics and self-defense and combined it with machines that require a level of core stability to achieve optimal fitness results for himself and his clientele.

At most of the pilates studios I've visited, the classes are small and beginners are given a ton of instruction before beginning. There are signs everywhere touting how newbies can modify their workouts by asking for assistance, but there isn't any mention of yoga in the studio I attend. Can you take pilates if you've never taken yoga? While they are similar, they are in no way connected — traditionally.

However, pilates and yoga have both evolved over the years, spawning everything from raucous yoga practice to the hyped-up pilates known as the Lagree Method, which uses a "megaformer" (obviously it is driven by Shia LeBouf and turns into a BMW). Nothing is as it was for long, much like my boobs after breastfeeding for years. But can you do one before the other? Can you take pilates if you've never done yoga?

Gia Alvarez, an instructor at the mega-popular SLT Studio in Tenafly, New Jersey says that you can absolutely do the intense, pilates-based SLT workout if you've never done yoga. She tells Romper, "A Megaformer workout is dramatically different than yoga, starting with the fact that you are on a moving machine rather than a stationary mat. Each SLT workout is performed with slow controlled movements, activating your slow twitch muscle fibers. You will plank, lunge, twist, and pulse with the assistance and resistance of weighted springs, all while constantly activating your core for stabilization."

Alvarez goes on to say that yoga and the workout you'd do with her are so different, that instead of a chicken and egg scenario, she thinks they're more like a belt and shoes — a complementary pair that is independent of the other.

Yoga and pilates may be friends, but they're not a ladder or rivals. You can do one without the other. But, if you can't choose, there's always PiYo, which is both, with a little booty shaking for good measure. Maybe just be flexible — that'll help.

More Like This
Banana Boat Sunscreen Has Recalled Products That Were Found To Contain Benzene
New York Can End Religious Exemptions to Vaccine Mandates, Says A Federal Appeals Court
How To Avoid & Treat Lyme Disease
Everything Parents Need To Know About Monkeypox