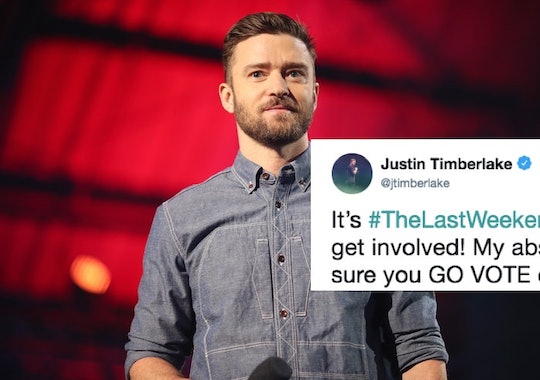 Most Americans will be voting in the midterm elections on Tuesday, and Justin Timberlake wants to make sure no one makes the same mistake as him during the last presidential election. So, he's using his platform to share an important reminder about the voting booth. And if you're wondering if you can take voting booth selfies, Justin Timberlake wants you to remember his 2016 voting faux pas before even thinking about busting out your phone.

The short answer to that question is that it varies from state to state, with some states fully in support of voting booth selfies, and others actually having passed laws prohibiting them. The long answer, aka the list of how each state rules on polling selfies, is coming atcha in just a sec, after this JT anecdote.

This weekend, Timberlake Instagrammed and tweeted a selfie of himself posing with his absentee ballot. "It’s #TheLastWeekend to get out there and get involved!" he tweeted. "My absentee ballot’s in... make sure you GO VOTE on Tuesday!! Remember: NO voting booth selfies 😂."

As you may recall, in October 2016, Timberlake flew to Memphis, Tennessee from Los Angeles to vote early in the presidential election. He posted a selfie to Instagram of himself in front of the voting machine, alongside a passionate caption about rocking the vote, as the BBC reported at the time.

Many news outlets reported on Timberlake's post, because taking selfies in the voting booth is actually against the law in Tennessee, along with many other states.

There are also a handful of states that allow selfies in the polling place, but they prohibit photographing marked ballots. According to CNN, these states are: Alaska, Louisiana, Massachusetts, Minnesota, Mississippi, Missouri, Oklahoma, Utah, and Vermont.

If you haven't seen your state mentioned on the above two lists, you're in luck — the rest of the states do not have any laws prohibiting selfies. According to CNN, those states are: Arkansas, California, Colorado, Connecticut, Delaware, District of Columbia, Hawaii, Idaho, Indiana, Kansas, Kentucky, Maine, Montana, Nebraska, New Hampshire, New Mexico, North Dakota, Oregon, Pennsylvania, Rhode Island, Virginia, Washington, and Wyoming.

But it's important to note that some of your fellow voters may not be as gung-ho about documenting Election Day as you are, even if it's not against the law to have your camera out — so always use your best judgment.

When Timberlake's selfie went viral two years ago, Amy Weirich, the Shelby County District Attorney General, issued a statement to Reuters about Timberlake's selfie. "No one in our office is currently investigating this matter nor will we be using our limited resources to do so," her statement read. That said, Timberlake actually got off easy — as CNN noted at the time, the "misdemeanor crime" of taking a photo in a voting booth was "punishable by 30 days in jail and/or a $50 fine." Luckily, Tennessee recently approved a bill to let voters use their phones at voting sites, but it hasn't been made law yet, CNN explained.

Even though Timberlake's not-so-cautionary tale makes it seem unlikely that anyone would actually get arrested for snapping an innocent voting booth selfie, everyone should still err on the side of caution, especially if you live in one of the states with laws against voting selfies.

That said, there are definitely no laws against selfies with your "I Voted" sticker — so don't forget to grab one after you cast your vote on Tuesday!