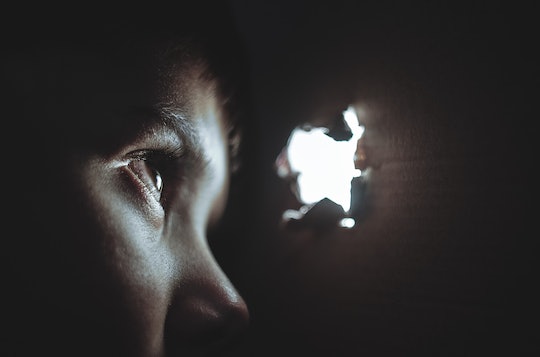 Can You Tell If People Screenshot Your Instagram Live Video? Because Creepers Gonna Creep

Whenever Instagram rolls out a new feature, there's one question on all users' minds: What exactly is the creep potential? The app has been rolling out Snapchat-style disappearing messages and a live broadcasting tool over the last few weeks, and now that it's available to all users, people are wondering, can you tell if people screenshot your Instagram Live video? The benefit of using live video via Instagram Stories is that it's not recorded and stored on your timeline, like with Facebook. It doesn't even stick around for 24 hours like a regular story, either. Instagram Live video is broadcast for up to an hour, and, once you're done, it's gone. Think of it like a one-sided Skype or FaceTime.

Instagram simultaneously introduced disappearing photos and videos that can be sent to individuals or groups through Instagram Direct. They're not timed like stories, either; they disappear as soon as they're viewed. Instagram's blog invites users to share anything "from inside jokes to your worst selfies" with the new feature, but let's face it, we all know what it's really for: nudes. Instagram seems to acknowledge that, too, because while it can't prevent people from taking a screenshot of a disappearing photo or video, it will notify users when it happens. Esquire reported that the notification will name the creeper, but then it falls on the owner of the photo to take action.

Unfortunately, that's the only occasion when users will be notified that they've been screenshotted, so if you overshare in a story or Live video, it may live on the phone of some rando from high school forever, and you'll have no way of knowing. Your friends may be notified when you begin streaming a live video, according to Teen Vogue, but unless your account is set to private, anyone can see it. There's even a Top Live feature that lets users explore current live videos. Users will be able to see comments as they happen, but not who's viewing — or saving — anything they might be streaming.

It's always a good rule of thumb to operate under the assumption that anything you post (or stream) on the internet is out there forever. Don't share anything you wouldn't want your boss, your grandmother, or your future grandchildren to see. And for good measure, just assume that the government is watching you, too. The only thing that's truly private is a windowless room inside a Faraday cage. Happy 'gramming!