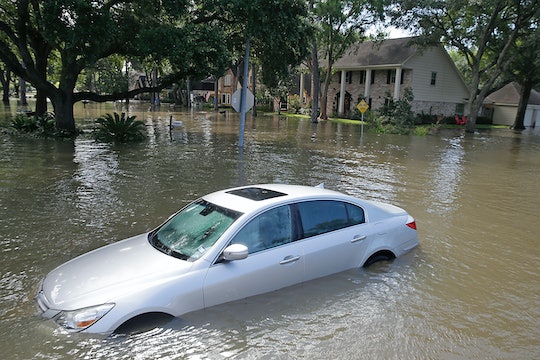 Can You Travel To Texas After Hurricane Harvey?

Over the weekend, Hurricane Harvey wrecked havoc on the Texas Gulf Coast, submerging Houston and the surrounding area in water. The storm has devastated the region, leaving residents and rescue workers on a long road to recovery. In the aftermath of the catastrophic event, you may be wondering: Can you travel to Texas after Hurricane Harvey? It's not impossible, but journeying to the regions hit hardest by the storm will be difficult for many people looking to help or connect with family members.

According to CBS News, the two largest airports in the Houston area, George Bush Intercontinental Airport (IAH) and William P. Hobby Airport (HOU), have canceled all commercial flights until further notice. So far, more than 7,500 flights in or out of Houston have been canceled since Friday, the day Hurricane Harvey made landfall in Texas, CBS News reported. Many of the airlines will allow passengers affected by the cancelations to change or re-book their flights without paying fees.

Ground transportation also came to a grinding halt as Hurricane Harvey ravaged Houston. The 11 trillion gallons of rainfall made it impossible for people to travel in and out of the region as of Monday, according to the Washington Post. But KHOU reported Wednesday morning that most of Houston's major road ways have reopened officially.

Although freeways have reopened in Houston, KHOU warned that the commute will not be "an easy one" for people traveling to and within the city. Many of the major road ways will be partially blocked because of high water, while some freeways east of Houston are still shut down in both directions, KHOU reported. The local station cautioned residents to not try and reach loved ones in the Beaumont or Port Arthur regions at this time as severe overnight rainfall has blocked road ways.

According to the New York Times, local Texas officials reported that 30 people are suspected or confirmed dead due to flooding and record rainfall, but the number is expected to rise. The mayor of Houston also imposed a curfew, in effect from 12 a.m. to 5 a.m., until further notice. So far, the Houston Police Department has saved more than 3,500 people from flooding, while the city's fire department rescued more than 400 people, the Times reported. The Harris County Sheriff's Office had also made more than 2,200 rescues.

The recovery from Hurricane Harvey is expected to be long and difficult. There are many ways you can donate time, blood, or money to local and national organizations to aid with the relief efforts. The victims in the Texas Gulf Coast region can use all the help they can get to recover from this devastating, life-threatening storm.