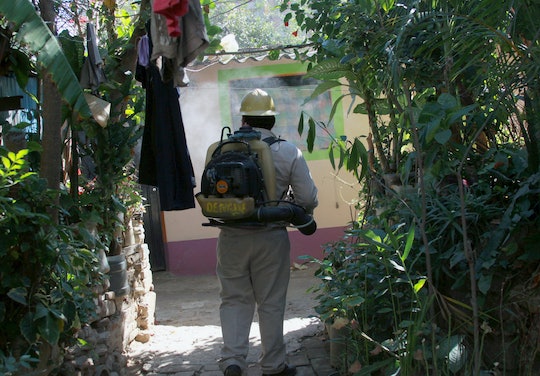 Can You Travel To Zika-Infected Countries Still? Experts Say High Elevation Destinations May Be Safer

In the past few months there have been so many travel warnings related to Zika that it's hard to keep up. Knowing if you can travel to Zika infected counties still all depends on where you are going, according to recent Centers for Disease Control warnings. On Friday, the CDC issued new regulations saying that it's safe to travel to destinations 6,500 feet, or 2,000 meters, above sea level, which includes Mexico City, Bogata, Colombia, or Bolivia's La Paz. The new guidelines emphasize science over fear, according to Dr. Martin Cetron, who leads CDC's division of global migration and quarantine. Zika infections and instances of the dengue virus just haven't been found in higher place. "I suspect several countries will be quite pleased," Cetron said, according to CBS News.

Initial travel warnings included all of Latin America and South America. In places like Mexico City, officials were wary of the initial travel bans, since instances of infection were pretty low. Mexico Health Department's Dr. Cuitlahuac Ruiz Matu told TK that it was a good thing "they are correcting things a little bit," especially after the country had lobbied against the CDC's warnings that tourists beware some of the prime tourist destinations because of Zika.

Since the travel bans, many tourists have been wary of taking their winter trips to "tropical" places. Hawaii has had four documented cases of Zika and many have still protested the travel guidelines. Lyle Peterson, director of CDC's division of vector-borne diseases told The Associated Press that it was affecting tourism and local farmers. "Given the fact that many affected travelers could be coming to Hawaii as outbreaks occur around the Pacific, there is always the possibility of infecting local mosquitoes."

International health officials have encouraged prevention as the key to stopping the outbreaks. But that means spraying some very heavy stuff around farms and crops that people depend upon. The Obama administration has asked Congress for around $1.8 million to combat Zika virus. According to The New York Times, President Obama said that “this sort of falls in the category of things that shouldn’t break down along party lines.”

House Democrats have asked for more attention to spending money on preventing Zika and research. Senate Democratic leader, Harry Reid of Nevada said in a statement that it's "critical [we] approve the funds immediately and give our government the resources it needs to fight the virus." He also added that the United States should "make sure that our nation’s response to the virus includes increasing access to contraceptives for women in Zika-affected regions who choose to use them.”

Zika travel guidelines are still something to be taken very seriously, especially for pregnant women. But if you're traveling Mexico City or any place at a high altitude without carrying a child, the CDC guidelines should make you feel a little more excited about your vacation.