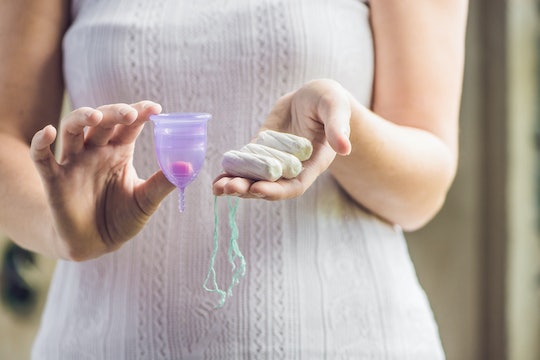 Can You Use A Menstrual Cup While Breastfeeding? Science Has The Answer

Menstrual cups are all the rage these days. In fact, I've had one sitting in my Amazon cart for months and I just now pulled the trigger. With concerns about the added chemicals in tampons, alternative options to menstrual care are becoming more and more popular. But if you're a new mom, you might be wondering if you can use a menstrual cup while breastfeeding. Turns out, there are a few things you need to talk about with your doctor before you hit "buy" on your Amazon cart, too.

Your six-week postpartum checkup is your key to knowing whether you can use a menstrual cup or not. Until then, according to WebMD, you don't want to be putting anything into your vagina, from a tampon to a diaphragm to your partner's penis. In other words, nothing goes into your vagina until you get the all clear from your doctor. Even if you're experiencing postpartum bleeding, you shouldn't be using a menstrual cup, according to Intima, until your doctor says otherwise.

Once you've been given the green light, you'll simply want to ensure you have a postpartum sized menstrual cup to use once your doctor says you have healed enough to start using one again. Most menstrual cups come in two sizes: one to use if you have never given birth, and one to use if you have, according to Parent Guide. While your body will return to roughly the same size it was before you gave birth, a millimeter size change in your vagina can be the difference between being leak-free or staining way too many pairs of underpants. And the latter isn't exactly what you want when it comes to your period, right?

So why, exactly, can't you use tampons or menstrual cups until you've been cleared by your doctor at your six-week postpartum appointment? According to BabyCenter, "In the first few weeks after childbirth... your body expels the lochia — a discharge of blood, mucus, and tissue — from your uterus. As long as the flow of lochia continues, you have an open internal wound at the site where the placenta was attached to the uterine wall. And like any wound, this one is vulnerable to infection." Common postpartum infections, according to BabyCenter, include endometrisis, an infection of the endometrium, and a urinary tract infection.

Keep in mind that if you are exclusively breastfeeding, you might not begin your period for several months after you give birth. Healthline explains why it might take more than a few months for you to get your period after you've been pregnant for 40 weeks (more or less), saying, "A woman’s period will typically return about six to eight weeks after giving birth, if she is not breastfeeding. If she does breastfeed, the timing for a period to return can vary. Some women might not have a period the entire time they breast-feed. But for others, it might return after a couple of months, whether they’re breast-feeding or not."

If you are exclusively breastfeeding and happen to be one of the women for whom their period doesn't return for the duration of breastfeeding, you might not need to answer the question of whether you can breastfeed with a menstrual cup at all!

It's still recommended that you use birth control, though, and even if you haven't started your period postpartum. BabyCenter says women "must wait four weeks after delivery to start using methods that use estrogen, such as the combination birth control pill, the ring, and the patch, because estrogen increases your risk for blood clots during the early postpartum weeks." You can use a low-dose "mini-pill," though, and it's also safe to use when breastfeeding.